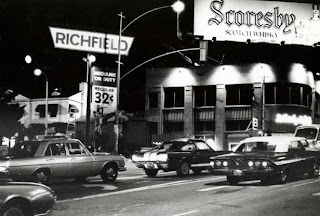 There was a new feeling in the air. It was different from when I had been in LA in 64. It was partly due to the wave of British bands sweeping across America, but there was something else, something completely new about the atmosphere around the Sunset Strip and West Hollywood.

I began to notice that people were more open and friendly than they had been in 64. There seemed to be a genuine interest and level of acceptance between people on the street who were strangers. Instead of just ignoring each other, they actually were taking time to stop and communicate. Petty differences seemed obsolete, while curiosity in and about others, seemed to be taking the lead.

You could quite literally walk outside, not knowing anyone, walk from Sunset and La Cienega to Sunset and Clark, where the Whiskey A Go Go was, and have a whole new set of friends. Really! It was a trip! And words like trip, groovy, right on, it's boss, far out, etc., were all being born out of this new sense of community. It was happening in a lot of places all over the country, but it would be a while before everyone knew how powerful and wide spread this social movement really was.

The world was being changed, right before my eyes. LSD was something I started hearing about as soon as I got out on the streets. Rumor was that you could find God on this stuff and alter your consciousness for the better. Almost immediately, I forgot about my losses and began to assemble a new personality, mixing the British pop scene, where I had just been, with newer elements of the psychedelic world springing up around me.

Color and design began popping up everywhere. Peace signs were a new and powerful reminder to people, that a war was going on, and the country was taking sides for and against it. "Make Love Not War" was one of the best slogans I have ever heard in my life, and was something 10's of thousands of young and not so young people practiced religiously, myself included.

A new phenomenon called "Hippies" began appearing everywhere. Young people, who thought dancing to good music, smoking weed, and making love, far out classed the typical get a haircut, a job, and join the army generation. These two factors would eventually clash violently, on Sunset Blvd., in and around Pandora's Box and The Fifth Estate, which were roughly located at Sunset and Crescent Heights Blvd., about a year or so later.

Everywhere I went, people were talking about music and new groups that sprung up like flowers out of the pavement. You could get some people together and just make a tape and walk in to countless record labels in Hollywood and get the damn thing released as a record. It was fantastic! Up at the Whiskey A Go Go, Johnny Rivers was doing live afternoon shows and killing em.

This would soon give way to bands like The Byrds. But I don't want to lose sight of my own story here, because just before this new wave of bands came ploughing through LA, there was a transition period. In between Johnny Rivers and The Byrds, I had begun to meet a lot of people, and one of those was a girl named Pam Burns. I don't recall how exactly we met, we just met. That was the way of it then, you just ran into people everywhere and got to know each other, it happened all the time.

Pam worked at Mira Records, a company that was started by Randy Wood, who at one time had been president of Vee Jay Records. He had offices on Sunset Blvd, west of the Whiskey and Pam was one of his personal secretaries. Pam liked me a lot and learned about my past quickly. She remembered the Billboard ads and asked me where I'd disappeared to. I told her the story and she couldn't understand how someone like me had just come along and then just vanished more or less.

I told her that I didn't know either, but that's what had happened and here I was with not a goddamn thing to show for it and no work. I played a lot of songs for her, so she knew I could write and sing and wasn't just some over hyped no talent ass hole. She said she wanted to talk to Randy Wood about me and see if she could get him to give me a shot at working on this project of his, that had run into contractual problems with an artist he'd recorded an album with named Chris Ducey. I told her thanks and to let me know if anything came up.
Posted by Bobby Jameson at 9:26 PM