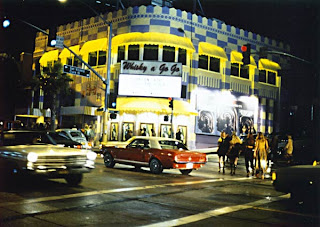 I haven't felt much like writing here in a while. I guess all the trying to stick up for what I was saying just finally got to me. It's a work in progress, and I don't have a lot of the skills that it takes to withstand what I'm already far too used to, and that's criticism, a lifetime of it.

I have many things to say, but I don't know if some of the people dropping in here can really handle the story of Bobby Jameson. I haven't even gotten to the bad part yet, and I feel as though what I am moving toward is more than some will be able to comfortably digest.

What I mean is, that each time I write something that makes me look like an asshole, and I am sometimes, there will be those who will want to use it against me, and others who say, "that's not the part I want to hear," while others just want to argue about it.

I am trying to keep on track, but unfortunately I have lost sight of what I was doing here. The only one who this is personal to, is me, it's my personal confession in a lot of ways. I am the only one who knows where this is going, and believe me it's going to get ugly. I'm probably reluctant because I know what that really means: The disintegration of my life, based on repetitive losses and failures that left me broke and resentful at best. Adding alcoholism and drug addiction to that equation is not a moral argument whatsoever, it is a factual depiction of how I changed from a kid who played guitar and made up songs, to the guy who ended up fighting the police in the streets of L A in the 60's and 70's.

It is difficult at times to fit the different versions of myself into a cohesive story line. So whether or not record companies did the right thing, which they don't, is irrelevant to what I thought, said, and did at the time. Most of it was not a good idea, but it was what I said and did. The record and music industry is currently in trouble because it made, and still makes, lousy choices about art, music, and lyrics.

They are not just companies, per se, they are businesses that deal in art, and the emotion of art, which is different than selling tractors. Art is special, and artists are special people, but when you ask art to conform to business instead of business conforming to art, you've got it backwards, which the music industry is finally paying the long awaited price for.

I was a pioneer in standing up for what I believed in at the time, and it cost me everything. I have no plans to argue with anyone about the price I paid for being Bobby Jameson/Chris Lucey. Most people could not, and would not, have done what I did. I don't need to pay anymore of a price than I already have.

You go do what I did for as long as I did, and then come and tell me what you think. I suspect, if you live through it, that you'd be worth knowing and I'd want to know you, but if you don't do that, then maybe I know a few things that others don't know, because I did do that.

In 1968, at the corner of Sunset Blvd. and Clark St., that's where the Whiskey A Go Go is, I and some friends were crossing the street after leaving the Whiskey. We encountered 6 white guys in suits walking toward us and a few words were exchanged between both groups.

We asked these guys if they were cops, and they said they were insurance salesmen from out of town, in L. A. for a convention, and wanted to visit the "Strip." More words were exchanged and a brawl started right in the middle of the intersection. People were knocked down and some were lying in the street hurt. One of them was nearly unconscious and was being approached by one of the suits who was about to kick him in the head.

I ran toward the guy doing the kicking, and shoved him off balance to keep him from carrying this out. At that point the suits all announced that they were Los Angeles undercover cops and that we were all under arrest. They said I attacked a cop, and I was charged with 2 counts of felony assault against a peace officer, which carries a sentence of 1 to 5 years for each count, so I was looking at 2 to 10 years in a CA state prison, if convicted.

I was on trial for over a year, but was not convicted. It took a lot out of me, and it was one more reason to get loaded and frustrated, which I did. It was this event and the year long trial that set the stage for what became the environment for my album "Working."

During these times I found myself always living somewhere different. There was always someone who wanted to manage me, or fix me, or just have me around for a variety of reasons. One thing was for sure, I was like a walking time bomb always ready to go off and never sure of when it would happen.

During that time I lived in a guy's house for a few months. His name was Howard Gilliam. He was rich and he used to tell me that he controlled the world's soy bean market. I never knew whether he did or not, but I lived with him. He thought he could manage me, so I let him have a shot. I did it so I could stay at his house. That's how I lived, I had no home, I was basically homeless for half the 60's and most of the 70's. I looked like I was doing pretty well, because I always drove some one else's nice car and lived in someone else's nice house, or apartment, but in reality, I was just broke and loaded.