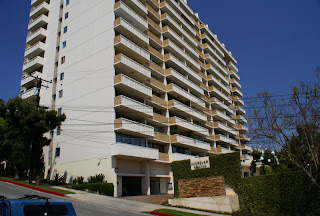 This is a picture of the Shoreham Towers, the building where Diane Linkletter lived. Across the street on Horn Ave., is where Nancy and I lived with Ed Durston. As I mentioned earlier, Diane had a major problem with her dad, Art Linkletter. He was a control freak, and successfully intervened in every single attempt by Diane to have a boyfriend.

When I got to know Diane, she'd met, and was extremely happy about it, a guy name Harvey Dareff, who I found out in the long run was a pretty good guy who saw more in Diane than her famous name and bank account. When her dad found out about Harvey, he pulled his usual bullshit, and appeared on the scene to carry out his dirty work.

Art Linkletter showed up to meet Harvey one day, and shoved a $10,000 check in Harvey's face, and told him to take the money and stay away from Diane. Harvey took the check and tore it into little pieces and threw it in Art's face and said, "No!" To Art Linkletter, this act by Harvey cancelled out the theory that all any guy wanted from Diane was her money. It also infuriated Art.

When I found this out about Harvey, I accepted him as a friend and as someone who cared more about Diane as a person, and not just a meal ticket. I never changed my opinion of Harvey. On the street we would call him a "righteous dude" implying that there was more to old Harvey than met the eye.

Art Linkletter was incensed that his crappy little game had backfired. He set out to get rid of Harvey one way or another, which again, he was successful in doing. Art liked control. He would go to any length to get his way, period. More than anything else in Diane Linkletter's life, this incident proved to be the final straw, and catalyst that pushed Diane over the edge.

In conversations with me, she complained that her life was not worth living, unless she could get her father to stop screwing up every relationship she attempted to have. She told me she had even started having relationships with other women, because she was so lonely. That too proved to be another ticket to more of Diane's sorrow.

The trouble with people like Art Linkletter, is that they have constructed a false image of goodness around themselves, and use it to manipulate the world around them to their own satisfaction. Prior to Diane's death, Linkletter's oldest daughter's husband also committed suicide by shooting himself.

Maybe someone ought to ask what the fuck was going on in that family that caused two young people to end their lives in rapid succession. Art Linkletter used his daughter's death to blame all things on drugs, in an attempt to remove himself as the possible cause for the tragedy. My experience in 1969 with Diane, was that her father Art had more to do with her death than any other single factor there was.
Posted by Bobby Jameson at 6:46 PM