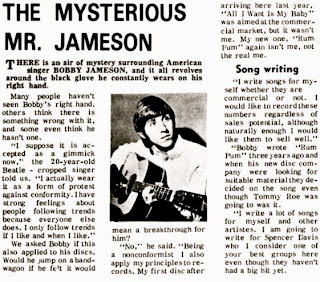 I left the "Ad Lib Club" that night with a changed mind about the current crisis I was living in. Even though I'd lost my connection with Andrew Oldham, it was now immediately evident that there was, and would be, interest in me as an artist in London. I felt a bit more at ease, but vowed to stay on the job until I accomplished my task, which was to secure a new deal with a new company.

I knew "The Pretty Things" people were serious, and looking back on it now that's where I should have gone. But where I was in my mind back then was scared. I think at the time I thought I needed people who appeared more prominent, and that's what I continued looking for until I found it. Once again it turned out to be the wrong move.

"The Pretty Things" and their people were down to earth and straight forward. I incorrectly assumed that to be a negative back then. I don't know why, but if I'm honest about it I was just wrong about them and have always regretted it. I foolishly believed that people in expensive suits were somehow better than ones who didn't dress up to do business. It probably had to do with the appearance of money, and since I didn't have any I wanted to be around what I thought were people who did. I was very insecure and it showed itself in many different ways now that I look back on it.

Be that as it may, I was finally introduced, probably at the "Ad Lib Club," to a group of English businessmen who all wore 3 piece suits and ties and talked all that high class bullshit I was searching for. Chris Peers and Harry, I'm sorry I can't remember his last name, represented a new company called Brit Records, which turned out to be the forerunner of Island Records, Chris Blackwell's company. They had a hit with a girl named Millie Small called "My Boy Lollipop" and were out shopping for new artists. I was looking for a new company, so it was a match made in heaven, or so I thought.

They agreed to take me on and pay my rent, and make sure I didn't starve to death. They agreed to give me a small allowance each month so I wouldn't walk around penniless. Now when I say a small allowance that's what I really mean. Probably 60 or 70 dollars a week. I never had any money. I was about to cut my 4th record, for the third company, on two different continents, in less than a year, and I still hadn't made 10 cents. So 60 or 70 dollars a week was like a windfall to me.

I ended up moving from Belgravia where I was first located, kind of like the Beverly Hills of London, to Knightsbridge. Still nice, just not as nice. I was dating an English girl named Judy Foote who's father was in the House Of Commons, kind of like the House of Representatives here. Anyway, PJ Proby, who was an American from Texas, and a big pop star in England when I got there, introduced me to her and we kept on seeing each other over the next few months. She had a thing for "American Pop Stars" as she called them, and that was her interest in me an "American Pop Star."

As I settled into my new surroundings the story of the "glove" just kept getting bigger and bigger. It had became part of my new public persona as it were. I'd always thought it was just some stupid thing I'd done for attention, but people liked it and wouldn't let it go. While I was looking to get into a new cycle of creativity, and work on songs that I wanted to record, the English press was more interested in "the glove." But I was determined to make good on my second chance with the British audience.
Posted by Bobby Jameson at 10:13 PM 1 comment: