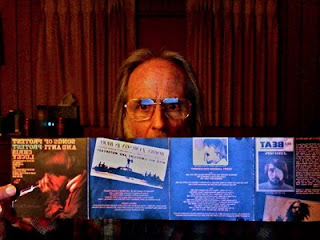 Well the answer to "What could go wrong?" was simple, it was "Everything!" But at the time I didn't know that. I was too engrossed, admittedly, in my own belief that things were turning around before my very eyes. The feelings I was experiencing that day were too good to worry about rational thoughts. I was like a starving man who'd been given a meal and was too busy consuming it to be wary of the fact that it might be tainted in some way.

So full-steam ahead was where I chose to place myself in the telephone conversation with Steve Stanley. Almost without reservation, I proceeded to answer any and all questions he asked me, never thinking that there might be a reason not to do so. It is not as though I told him things I didn't want him to know, but more over the fact that I was so willing to do so with a perfect stranger. I chalk it up to my own need to discuss it with someone, anyone, so as to be rid of the burden of being the only one who knew all the facts and history in context. The weight of carrying it around alone for decades was literally a boulder on my back, which I was eager to drop.

One of the most interesting things about the conversation was becoming aware that Steve was confused about many of the facts, such as the Billboard Magazine Ads from the 60's. He, and others I learned, were under the false belief that those ads were somehow linked to the original release of Songs Of Protest in 1965 on Surrey Records, which was completely wrong. I explained to him that the ads came out nearly a year and a half before the Chris Lucey album and were not connected to it in any way. Of course this presented all kinds of problems to those who had taken the position that the ads were specific to Songs Of Protest. I informed him that the ads were for I'm So Lonely, released as a single on Talamo Records in 1964, in conjunction with Tony Alamo, and had occurred before I went to England. Songs Of Protest wasn't even recorded until I returned to the U.S. in 1965.

Unknown to me at the time of this conversation, was the fact that Rev-Ola had printed and included a booklet with the wrong information inside the CD itself as part of the history of Chris Lucey/Bobby Jameson. They'd also run promo ads, I later learned, using the incorrect information, which still exist today on the internet. It wasn't until I saw what was written, and read it for myself, that I learned just how screwed up it was. The entire content of what was included in the CD itself was written by Steve Stanley and was the accepted version at large by nearly everyone who had an opinion on the subject.

Other major problems with information included in the CD, were references made to Diane Linkletter's suicide and my supposed connection to it, which were false. I knew nothing of these things as I talked with Steve Stanley during that first encounter with him. None of this was actually known to me until I received, some two weeks later, my first and only copy of the CD, which Steve Stanley mailed to me. Had I known at the time of my first conversation with Steve what I later became aware of, that conversation would have been markedly different.

There was nothing written for, or contained in, the CD that was done out of malice, but there was, in my opinion, a tendency to glorify facts which proved to be false, for the purpose of publicity. On the other hand, it had been assumed by most that I was dead at the time the CD was being constructed, so those who OK'd what became the final package had that leeway as a buffer in their mind.

Prior to receiving my first copy of the CD, I spoke with Steve on several more occasions. Those conversations as well were without my knowledge of what I was yet to find written in the booklet contained within the Songs Of Protest CD. I do not know, in hind sight, what the difference in our conversations would have been, other than knowing now how our conversations changed once I got the CD. I recall quite clearly that on the day I read, for the first time, what was written in the booklet I felt as though I had been kicked in the stomach when I got to the part about Diane Linkletter. The reference to Kim Fowley being the source of this information had the singular effect of thoroughly pissing me off.