(part 140) A THING NOT UNDERSTANDABLE 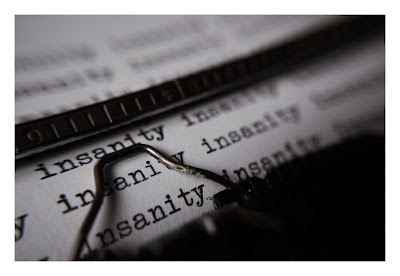 As I write these most recent of posts, it may appear that I am rehashing old information. I am endeavoring, through repetition, to make clear the nature of the thing called insanity, or madness, not merely as words to utter or write, but as real terms, for the purpose of acknowledging and clarifying concretely, the actual aspects of mental and emotional disease, whether organic or substance-induced.

The nature of the insanity I became engulfed in, had as it's basis, an unceasing repetition of subject matter. I, for whatever reason, could not change the subject, not unlike a phonograph record that sticks in a certain spot each time it's played.

The term obsession, or preoccupation, refers to repetition as the very heart or nature of itself. To be doomed to always ask the same set of questions, led to an unchanging set of answers, no matter how many times those questions were asked.

As time passed, I became lost in the futility of attempting, unsuccessfully, to write not only my history, but my fate as well, on the head of a pin. Bluntly stated, I could not get off it. It is said that in heaven there are many mansions, but in the realm of the insane, there is but a single mansion with an infinite number of rooms, all of which are identical.

Repetition was life on the razor's edge and the force that annihilated me. In my life, the problems stayed exactly the same, year after year. And thus my solutions, which always failed, were repetitious as well. This is the mental illness labyrinth, out of which I could not escape.

The circular reality started and ended in exactly the place it had begun. I ran from it, and found I had run into it instead, trapping myself in a hall of mirrors, where reflections were only reflections of still more reflections.

Where had I gone? I could not find myself at that point. I walked through my life on a treadmill, expending myself completely, without moving an inch. As if in a dream, I ran but never got to where I was running, or away from that from which I ran.

I always found myself in exactly the same place with exactly the same feelings. I had lost all perspective. I obliterated myself with drugs and alcohol because I could not stand what had happened to me, and I falsely believed I had no power to change it.

I begged lawyers and publishers, managers and producers, each time I had the chance, to help me, but without exception, I was told it wasn't a large enough sum of money to bother with. This was akin to being told you weren't pretty enough to rape.

I recall the hideous feelings attached to being asked to accept such soul-numbing bullshit. I was made to feel like a starving man on the street, and when I reached down to retrieve a crust of bread dropped by one of the elite, was scolded for having the audacity not to return it to them.

As you read this, you may be saying, "OK, we got it, you were crazy," but you don't "got it." You have no idea what I'm leading up to, or why I'm making and remaking this point.

As I write, I remember, and as I remember, I have, to some degree, to relive those days and what they were like. I am once more temporarily trapped in the pathetic madness and pain of my own thinking. Each room I occupied, the furniture, the odor, the pictures on the wall, and me, lost as lost can be.

I am not repeating. I am drawing you a map. A detailed description of the clear and concise inability of a human being to simply drop it and walk away. I could not drop it.

It was nailed to my soul. It does not matter what you think or what you would have done, it is about what I did because I had to and didn't know why.

I stood alone in the living room of Carol's apartment. I'd run her off while in a drunken rage and for three days snorted cocaine and drank non-stop.

I did not sleep but a few hours during that time. I was more like a machine than a person, as I calculated and recalculated the past, present, and future.

Like a top spinning in perpetual motion, I wound myself up into a frenzy of flat-out revenge-oriented insanity. It had occurred to me, in that room, that the most insane thing I could possibly do was to go back on the ledge of the Continental Hyatt House.

I sat on a chair, amused by the thought, "Goddamn, Bob, that's fucking crazy," I said out loud. The more I dissmissed the thought, the stronger it became. 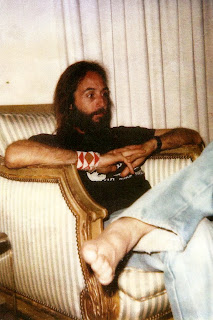 I was torn, on the one hand, to refuse it a place in my head, yet, on the other, to relish, in a demented way, the bizarre nature of even thinking it, let alone truly considering it.

It was brilliant, I thought, in it's absolute ruthlessness of reason. So extraordinary a concept that it's absurdity was also it's very beauty as a thing not understandable.
Posted by Bobby Jameson at 9:07 PM 3 comments: