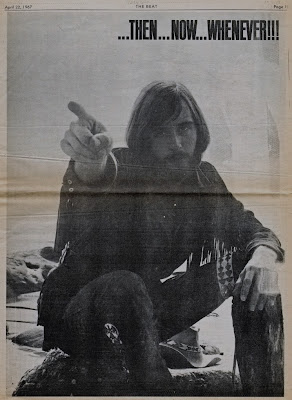 Making "Color Him In" was an act of love as well as being frustrating. All the potential in the world was there, but the frustration of always being dominated by the money clock was a pain in the ass. We couldn't work when we were ready. We had to work when the time was available. I know I have already stated this, but it deserves repeating, because it dominated the way in which "Color Him In" was made.

There were shortcuts where there shouldn't have been, such as in the song "Jenny." It's basically a lounge singers song, granted, but there are parts of the vocal where I and the background singers are out of tune slightly and this weakened the impact of the recording overall. Instead of fixing it, Steve Clark would say, "It's good enough for government work" or something similar and have us move on.

The problem with that, and there were many, was that I started getting the feeling that the whole album was going to end up suffering as a result which it did. Likewise the ending of "Windows And Doors" has a crowd applause that Steve added, because again, a note was missed by me at the end of the song. Rather than get it right dumb fixes were used to offset the mistake. What you end up with by doing that, is the mistake plus another mistake. You can well imagine the frustration over having to work in this manner.

When "Color Him In" was being made we had no record deal. The cost of recording was fronted by Steve Clark's production company "Our Productions." If a label had been involved from the start we possibly could have had more freedom to do what needed to be done. But the way it was Steve was always looking over our shoulders and trying to cut costs which hurt the album overall.

Don't get me wrong, "Color Him In" even with it's mistakes and weaknesses has held it's own over a period of 41 years. Like Chris Lucey's "Songs Of Protest And Anti Protest," both albums have managed, on their own merit, to be regarded as viable period representations of the 60's.

In point of fact it was my relationship with FranK Zappa that led to the album being released on Verve Records which Frank and "The Mothers Of Invention" were on. I have always assumed that Frank felt he owed me something because of my openness with him regarding Gail. I was never a problem for Frank, and his intervention regarding "Color Him In" and Verve, was his way of saying thanks. It was Frank who asked Tom Wilson to take a personal interest in "Color Him In" which Tom did. So you see, even the deal itself with Verve was handed to Steve Clark. He didn't have to go out and shop the record. The label came to him via my friendship with Frank.

The ongoing difficulty between "The Association" and Curt Boettcher was again one of the problems that interfered with our work. Curt would get depressed over it and his creativity would suffer as a result. The way that showed up in his work on "Color Him In" was lack luster ideas instead of his usual genius and creativity.

The clearest example of this would be on "Who's Putting Who On" and the horn parts which at best are annoying. Instead of using Jim Bell's talent to make those parts what they could have been, it was passed over and left as is which was never adequate. These imperfect pieces of "Color Him In" are some of it's weaknesses and have always bothered me personally, but the main criticism of the album was the final mix.

It was always mushy! Too much bass, too little mid range, and almost no high end. This kept the record from ever having the clarity it could have had, and negatively affected the separation that was built into the original recordings. It was a sloppy mistake and I complained about it from the very beginning.

When the album was being mixed it was played back through those Goddamned "Voice Of The Theater" speakers at high volume. When you played it on those, and mixed it, there was no possible way it would sound the same as it would when played on smaller speakers like people had in their homes or cars. It took years to get people to quit using those damn mammoth speakers for mix down. There is pretty much zero clarity of sound when that is done which would explain a lot of the muddiness in recordings from the 60's and 70's.

Because of Curt's personal clash with both "The Association" and Steve Clark, the final stages of production for "Color Him In" suffered. You know how that goes. You work hard on something in the beginning, but as time passes your enthusiasm wears thin. If you add a few other major distractions to the mix it gets worse. "The Association" had a hit and they understandably had to be dealt with, by both Curt and Steve, but as a result "Color Him In" did not finish in the same way it started. It was as if we were just trying to finish it as fast as we could in the end.

I am not just passing judgement on my own creation here. I am attempting, as best I can, to relay to you with some clarity how it was this record was made. The ups and downs, the good and the bad, the successes and failures. I have waited 4 decades to explain some of the inner workings of the process and voice some opinion about what went wrong and what went right with "Color Him In."

In the long run the album is what it is, and some people hate it and others love it. My feeling has always been "Let me back in the studio so I can fix what is wrong. Let me make it sound the way it could have sounded and the way it should have sounded." But alas that was not to be, and I have had to accept "Color Him In" for what it is. "Color Him In" is a part of me. My life was changed because of it. The story about that part of my life is not ending here but only beginning. The release of the album and what transpired over the next couple of years was as important to me, maybe more so, than the making of the record itself.