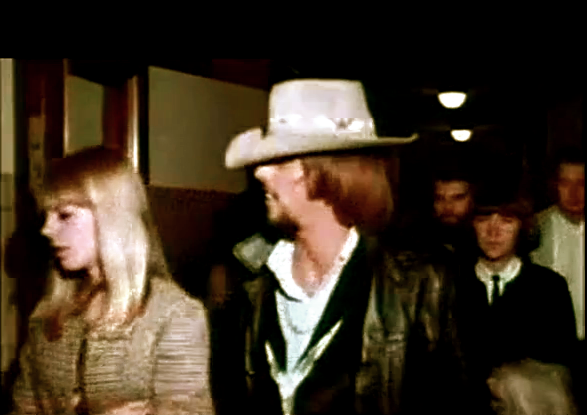 Becoming involved with women from my past, online, presented me with a variety of problems, particularly when it came to so-called social media platforms. The reason being, was each of them became aware of each other's presence. I had nothing to hide, as I said earlier, but hadn't considered the possibility that they might not like each other at some point. I'd known each of them separately, in the past, but now there was a collective intermingling taking place. Looking back on it now, I realize I blindly put my foot in it. I'd been so focused on what I was working on, before any of them showed up, that I paid no attention to the now obvious stupidity of it.

Early on it was Paula who started calling me on the telephone, just to say hi occasionally, and we'd talk about the old days in the 60's, and how we'd met. The more I talked to her, the more details I remembered about that specific time. She'd been one of the few people who was actually present at some of the "Color Him In" recording sessions, which, according to her, she remembered fondly. As for me, it was more a memory of the work I did rather than who was there.

As time went by, and the calls from Paula continued, there were conversations where I erupted in anger to some of her remarks about the old days in West Hollywood. One of them had to do with me being on the 11th story ledge, or roof, of the Continental Hyatt House on Sunset Blvd. in the 70's. You might want to keep in mind that I had not seen nor spoken to this woman since 1967. Her comments about this life altering occasion of mine seemed to be minimized by her at the time. For me it just stood out as an uncomfortable subject that she really didn't want to discuss. She told me she'd driven by as it was happening, but said she didn't know it was me up there until later in the day. I asked her why she hadn't tried to contact me after she found out? She said she'd heard I was up on the Hyatt House demonstrating against record companies.
"What?" I yelled, "I was up there because I was going to commit suicide goddamn it!"
"I didn't know that at the time," she said, "I just heard it was a stunt."
"Well even if it was a fucking stunt, as you call it, why didn't you try to get in touch with me if you cared so fucking much?"
I never really got an answer to my question that day about why she hadn't tried to contact me, but the feeling I got from that call never left me.

In another telephone conversation she told me she had been at a house in Laurel Canyon, in 1980, when I was there playing/singing with some musicians and song writers. Again, I hadn't seen her since 1967, and had no idea she was there, so I was pretty confused when she told me about it.
"If you knew it was me Paula, why didn't you say something?"
"Because I didn't like the outfit I had on that day and didn't like the way I looked," she said, "so I didn't say anything, and I didn't know if you'd even remember me!"
Huh? If I cared about someone as much as she was claiming to care about me, and I ran into them thirteen years later at a house in the canyon, I think I would have said something no matter how I looked, but that's me. My response to this was it kind of pissed me off, and I said so at the time. I had a hard time believing that she could care so deeply about me, if she couldn't even say hello when she'd been in the same house with me.

As far as Sharon went, she'd taken to emailing me on a regular basis. I couldn't handle another set of telephone calls, so I never let that get started with her as I had with Paula. Sharon also said she'd always loved me, and said she'd named her son, Jameson, from her marriage to some other guy, but again, it was all news to me when I heard it. In both the case of Sharon and Paula there was one clear fact that stood out to me. The claim that, "I was always in love with you," that I was hearing from both of them now, had not been present back in the 60's. I don't mean to belittle what they said their feelings were, but history notes that both had suddenly disappeared from my life by their own choice. One day they were there and the next day they were not. So love had not been so clearly defined back then, or so it seemed to me.

Georgiana was a different case altogether. I had had no love interest in her whatsoever, at least that I could recall. I met her in 1966 on the strip, and I only know that because I saw us together in some film footage ( still picture at top of post) from "Mondo Hollywood" on youtube. We were walking through the Beverly Hills Court House together when I was on trial for disturbing the peace at Ben Franks coffee shop on Sunset Blvd. Bob Cohen filmed some of the trial and it ended up in his movie. Other than that I have no recollection of Georgiana being in my life until 1981. But on myspace, and then facebook in 2008 onward, she acted as if we'd been life long friends. I remember thinking what is this broad's trip? Even Georgiana was surprised by the "Mondo Hollywood" pictures of her and I together, so she hadn't recalled it either, until I posted the pictures on fb.

The one thing I've learned about people from my past, without exception, is that each of them have recollections that don't square with my own. I stand on my set of facts and details regarding what I say actually took place. If someone has a different version, and I'm sure that they will, let them put it forth if they'd like, and I will post it. If they remember things differently than I do, I understand, but I am writing about what I recall. I have no need to alter anything, because the facts themselves paint an extremely clear picture.