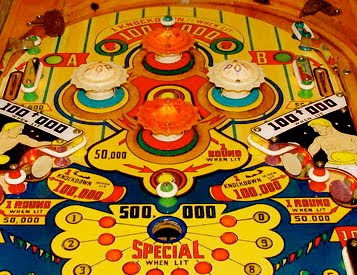 It wasn't like I thought anyone missed me or my music. I had assured myself that I was long forgotten by everyone, or not remembered at all. In the eighteen years since I'd left L.A., there had been no clamoring that I was aware of to locate the likes of one Bobby Jameson. In my world it was just hard physical work, raging daily headaches, and nickels and dimes squeezed out of an unforgiving world.

I was competing, it seemed, with my early teens, when I'd loaded hay-trucks around Phoenix for my step-father in Arizona. The work was hard and the pay was shit, and I now plodded forward daily in a life I'd learned to tolerate in place of the one I'd wanted. On the bright side, I stayed sober and clean, which was some sort of miracle I thought, because there hadn't been much good derived from my staying sober, other than the world did not have to cope with one more loaded crazy man.

No one in San Luis Obispo, CA had ever seen me loaded, and because of that, they were unaware of how much I had improved since my old street days elsewhere. They never understood, and still don't, how far I'd come, because they had no measuring stick to gauge it by. In L.A. there were people who were grateful, based simply on the fact that I didn't get loaded anymore, because they had seen me at my worst. But in San Luis, they just found things to complain about, like my anger, and how I was capable of flying off the handle in a moment's notice. Not once did they understand how, in the old days, that anger had been lethal, but now was restricted to mere words.

In the world of sobriety, one is expected to learn how to be happy, joyous, and free, but in the world of Bobby Jameson there was little to be happy, joyous, and free about. In each instance, that which had worked, stopped working, that which solved a problem ended abruptly causing new ones. This circular pattern of frustration had beaten me into a form of reluctant submission at best, while at the same time continued to present me with one form of disability after another.

As I looked on at those who'd come after me in sobriety, in many cases, I saw improvement in the quality of life they were able to achieve. In my case I saw only the repetition of old problems appear and reappear in a never-ending cascade of "what's next" certainties. Over the the years I settled into the pattern of waiting for the next rock to fall, and sure enough it would. Many would chirp and moan, saying, "that if this is what I expected, it would surely be what I got." My answer to them then, and it still is today, was, "It must be real easy for you assholes to look on in judgement while never having to walk in my shoes!" Of course this was dismissed as an excuse by them as you might well imagine. The convenience of blaming someone else's hardship on the one suffering from it is reminiscent of the rich blaming the poor for being hungry.

So to some extent, I hope I have set the stage for this post, and those to come, by clarifying, what it was like back then trying to deal with the two-headed dragon of chasing success for twenty years and then withdrawing from any attempt to pursue it at all for the same amount of time.

As I said, I was working in a mobile home park, and had no real concept of me and the music business at that point. I played my keyboard for fun at times, but overall the subject of what I once did was non-existent, and rarely, if at all, discussed with anyone. It was no more than ancient history, and had been relegated to the outskirts of my thinking.

There is a reason why I keep driving this home by repeating it. It is a point that will stand in direct contrast to the things that began happening out of nowhere in 2003. Any ability to cope with, or understand what was about to transpire was limited. Being faced with information from a complete stranger about my past one afternoon on the telephone, was the last thing on earth I was expecting.

As I sat with my brother Bill in the house (we were alone because my mother had left town to visit her niece in Southern CA.) the phone rang. Thinking it was probably someone in the park needing me to do a job, I answered it with that in mind.

"Hello," I said, waiting for a response.

A somewhat startled voice answered me. "Is this Bobby Jameson?" they asked.

"Yeah!" I said, "Who's this?" not recognizing the voice of the caller.

"Uh, my name is Steve Stanley," the voice said, "and I work for a record company in the UK called Rev-Ola, and they have reissued your old 60's album Songs Of Protest And Anti Protest by Chris Lucey as a CD."

I stood there for a few seconds trying to compute what had just been said to me and replied, "What? Who is this, what are you talking about?"

"You are that Bobby Jameson aren't you?" asked the voice.

I was caught completely off guard by the question, and actually thought it was someone playing a joke on me, but quickly concluded that no one I knew had this information to do that, so I asked again who it was.

As a reader, I would ask that you try to understand how out of the realm of expectations this actually was for me on that day. A completely cold call from a total stranger, out of the blue, talking about something so far from my then reality that it literally made no sense to me.

"Well Steve," I said, "What did you say about Chris Lucey?"

I stood there with the phone in my hand, staring at Bill, who looked as confused by the conversation as I was. I said to him in a frustrated voice, "What the fuck is this guy talking about?"

"Is this some kind of fucking joke man?" I said into the phone.

"No!" said said the voice, "Songs Of Protest And Anti Protest was released by an English company last year, and it's doing pretty well, kind of an underground cult hit."

My brain began to race and old lights began to come on as if someone had plugged in an old dormant pinball machine in an arcade, and now watched it hum back to life. Old dreams I'd long since rejected as failures began to flicker and buzz in a dark corner of my mind. There was no way to stop my reaction to the information I was receiving. No way to close out the message or to have prepared myself for it at all. I was caught completely off guard by the call and the reaction was automatic, as if programmed long ago to react in the only way it could, once triggered. It was the "dream machine" from my youth. The pulsating mechanism that believed in magic, and it had been turned on by a stranger on the telephone on a sunny afternoon in San Luis Obispo in an old mobile home park on the planet earth.
Posted by Bobby Jameson at 9:23 PM 2 comments: