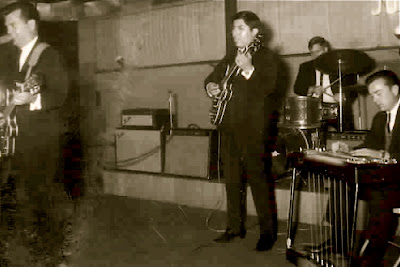 It's hard to know when I've finished writing about something. In the case of Jesse Ed Davis and my working with him, it seems as though more should be said.

The subject matter of "Junkie Jesus" and "Jesus Was An Outlaw Too" was where I went to, lyrically, following "Holy Holy Holy" and my failed attempt at making a truly unique second album for Verve in 1968. "Working" was in a way, as I have said, a form of capitulation to those who held the purse strings.

It was the failure of "Working," and the catastrophes that followed, that caused me to write even more graphic lyrics once I ended up in Ohio. My intent to create one of a kind lyrics was a deep driving force within me that can only be partly explained through the finished recordings that Jesse and I created.

I can tell you that during this session, Kirby Johnson, who was a hell of a good guy, kept coming over the talk back mic from the control room, offering suggestions to Ed Davis about how and what to play at any given time.

Jesse listened to this a couple of times, with a look of frustration on his face, and finally just said to Kirby, "Hey man you wanna come out here and play the guitar?" Kirby answered back, "No!" Jesse's response, "Well then shut the fuck up, will ya?"

I started laughing and Kirby damn near crawled under the board in the control room. Gavin Murrell took it all in as if it were just part of the day's work. He sat in a chair saying nothing with a big grin on his face while Jesse, me, and the other two players continued on working.

It was always clear to me that Jesse Ed Davis knew where he was going and how to get there. The guys playing with him knew it too. I did not play on the tracks at all on this session, there was no need. I would have slowed down the process that occurred between the three of them.

Jesse wanted me to concentrate on the vocals, and that was it. His crew built me the platform, musically, from which I could speak in the form of my vocal. His enthusiasm for what he and I were doing was undaunted and complete.

It remains a highlight to this day in my life of recording music with great players. I have the luxury of that experience to keep forever.

These two tracks are important, not because of my involvement so much, but because Jesse Ed Davis arranged and played on them both. In the history of great guitarists, Jesse Ed Davis, an american treasure, is among the finest.

The video below is a recently found 3rd song from the session with Jesse Ed Davis and myself. It was located in 2011. It is a work track with my vocal and Jesse doing overdubs to his own guitar tracks. Jimmy Karstein, drums, and Bob Glaub, bass, are isolated out in this track.