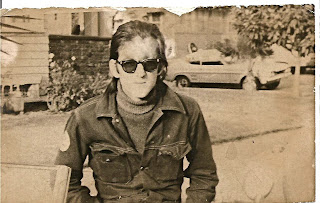 On a sunny California day in 1970, I was told by Joe Steck, that my mother was trying to reach me. I walked south on Sweetzer, down to Santa Monica Blvd., where there was a Mayfair market and a telephone booth. I called my Mother and asked her what the trouble was and this is what I heard her say. A remark that I will never forget as long as I live. "I don't know how important this is to you,- Bob, but your father Bill committed suicide."
Posted by Bobby Jameson at 3:38 PM 1 comment: