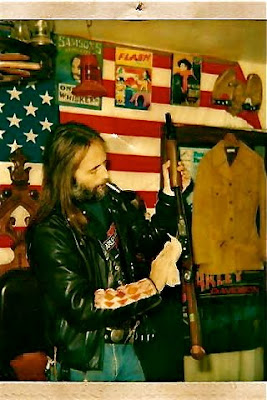 In 1974 I was dangerous. I'd come to the understanding that I was not wanted or needed by anyone in the music business in L.A.

The city was not going to tolerate any more of my public performances on their buildings or any other structures. For the first time in eleven years, I felt as though there was no purpose for me in Hollywood.

This psychological blow was at the heart of what I would do in the next year or two. The danger for me was, that I was me, and couldn't be anyone else, though at times I truly wished I was.

I was stuck inside my damaged mind, and it was doing the thinking for my damaged body and emotions.

In a setting that was on the one hand hostile, and curious about me on the other, I was an accident waiting to happen.

It was a love-hate relationship that existed between me and L.A., and I was a sideshow event that people said things about like, "Hey, there goes that jumper guy." I was now no more than a curiosity with an even more curious past.

I knew who I had been, and because of it could not put myself into an average-Joe pair of shoes, anymore than I could fly to the moon.

I walked around with the ever-playing movie of my own life history swirling in my head, while it tapped constantly into my emotions.

I mean there isn't a lot I can do with this shit, it's just there in my head playing.

Eleven years of the progressive disease of alcoholism had done a real job on me, but I continued on anyway, with the deep belief that booze and drugs were the only thing keeping me together.

This, in fact, is the delusion of the disease itself: that what is literally destroying you is your only true ally and friend. It's there when you are afraid, lonely, happy, angry, sad, etc.

It is the single constant and consistent fact, other than breathing, that one is aware of while in the grips of the disease.

In your mind, or my mind, to be exact, this is the one thing that makes all other things possible, and without it one could not exist.

The word "substance" includes any and all things ingested, by whatever means, for the purpose of altering, in any way, one's own consciousness.

It is the manually applied version of an automatic process, in other words, the user takes over the daily job of how they feel, by adding substances not normally present at all, or in the amounts being added.

Who I was in 1974, was not a pretty picture. There had been no help of any kind, but my problems kept compounding themselves, and were further complicated by an expectation of the world that I act right.

At the point at which I was, in 1974, that was highly improbable, if not downright impossible. I had no ability to rationally view my life, or options, since I continued the destructive process of pouring gas on the fire by using.

As mentioned, I had ceased trying to kill myself. The killing of one's self is an act of murder. If one gives up attempting to carry out that act on one's self, it does not necessarily mean that one has given up the willingness to commit such an act on someone other than himself.

This is at the center of my position that I was dangerous. I was obsessed with protecting myself from others, who in my mind were out to do me no good.

Whether this was true or not, is irrelevant, because it was what I perceived to be true, thus causing me to be on constant alert.

Since the world had rejected me, in my opinion, the world was my enemy. It didn't want me, but I had nowhere else to go but the world.

My sense of not being a part of anything, and with no clear alternative, I was just a machine that kept going with no concept of where I was going.

I was stunted emotionally and developmentally, and in many ways was like a child in the way I viewed things. My emotional read on the world around me was not that of a an adult , but of a damaged or abused child.

The only times in my life when I'd been at all responsible, were when I was writing music and working in the studio. Without that, I just wandered aimlessly through each successive tragedy.

I had no money, no job, and surrounded myself with dope dealers, con-men, prostitutes, and others, who were similarly disposed to view the world with disdain.

In 1974, because I had no idea of what to do, I accepted an invitation to go to Nashville, Tenn. with a cocaine dealer, whom I will just refer to as DP.
Posted by Bobby Jameson at 10:23 PM No comments: