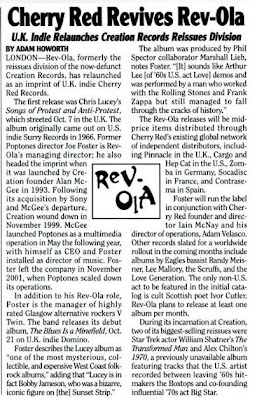 In 2003 I did not own a computer nor had I ever used one. I was only vaguely aware that there was something called the internet, or world wide web. I was completely unaware that anything had been written about me or that anyone was looking for me. I did not know that Songs Of Protest And Anti Protest had been reissued as a CD in 2002 by Rev-Ola. None of what was actually going on in the music business or on the internet was known by me prior to the telephone call I received from Steve Stanley in 2003. I had never heard of Rev-Ola Records.

I was not in contact with anyone from my past, either in the music industry or outside of it. I had spoken only briefly to four different people in eighteen years from Los Angeles, since leaving in 1985. There were no get togethers, mail of any kind, or other forms of communication by me with anybody from my past. I had literally disappeared off the planet for the most part, and had chosen to keep it that way.

I was living completely outside the realm of knowledge and speculation discussed in this telephone call. My complete attention was directed somewhere else entirely, and had been for nearly two decades. My ability to even fathom what was being said to me in this call was difficult at best. To me, it was more of a crackpot discussion than anything real. Only as the conversation continued did I begin to take seriously any of what was being said.

"What's your name again?" I asked.

"Yeah, OK Steve, sorry," I said, "you kinda caught me off guard with this stuff. How the hell did you find me any how? Nobody knows where I am, and they haven't for a long time."

"Yes I know!" said Steve, "Everybody thinks you're dead, but I didn't. I always believed you were alive and now I'm really talking to you. I can't believe I'm actually talking to the real Bobby Jameson."

I didn't know how to respond to his enthusiasm. It felt strange hearing someone talk about me like that. I felt uncomfortable and confused by the conversation and didn't know for sure why I kept talking to him. It just didn't make any sense to me. One minute I was in my life and the next minute I was talking to someone I didn't know about a life I'd long since given up on. Part of me was angry that he'd called at all, because it infringed on my choice to be anonymous, but another part of me was curious about what he would say if I kept talking to him.

"Because no one gave a shit about it when it was released the first time, back in the 60's," I said, "It wasn't like it was a big hit or anything."

"Wasn't there a huge Billboard ad campaign run on you back then?" he asked.

"Yeah!" I said, "but it wasn't for Songs Of Protest. The Billboard Magazine stuff was way before that album came out. The Chris Lucey record happened after I got back to America from England in 1965."

There was a pause, as if what I had just said didn't make sense to him. Later I learned that his facts were muddled in many ways, and not always accurate.

"Well it's a great album Bobby and a lot of people think so," said Steve, "I'm just glad I could find you and tell you that personally."

"Yeah well, how did you find me anyway?" I asked again.

"Damn!" I said, "that's pretty weird man. I'll have to think about that for awhile. Why would you go to so much trouble to find me?"

There was a pause. As if I'd again said something that didn't register right with him.

"Are you kidding?" he said, "Finding you, and you being alive, has been something I hoped would happen ever since I first started working on this project with Joe."

"Joe Foster," said Steve, "The director of Rev-Ola, the company in England who reissued your album as a CD"

"Wait until I tell him I found you," said Steve, "he isn't going to believe it."

"Yeah, well I don't really believe it myself," I said, "Do you have any idea how weird this all sounds to me?" -