(part 78) CHOOSING THE SONGS FOR THE ALBUM "WORKING" 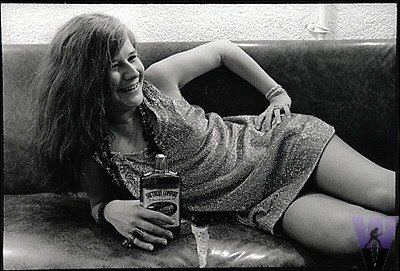 I had been drinking a lot of Southern Comfort when I began thinking about making the album "Working." I was also taking a lot of pills at the time. The reason I started drinking Southern Comfort was because Janice Joplin drank the stuff by choice. In 1967 or 68 I watched Blue Cheer and Janice do a gig at the Whiskey A Go Go. After the show I ended up at a cabin style motel in Hollywood, on Sunset Blvd. with two members of Blue Cheer to meet Janice.

We waited around awhile until Janice showed up with a quart of Southern Comfort in her hand. She began laughing and joking with the two guys from the Cheer, who she knew well from San Franciso, and quickly glanced over at me like I was a candy bar. One of the guys from Cheer introduced us, and she looked over the top of her Granny glasses at me and smiled. I recall vividly, watching her put the bottle to her mouth and chug a lug an amazing amount of alcohol on the spot.

I was so impressed by her ability to consume that much booze, that I quickly became a fervent user of Southern Comfort, and always told people about Janice when they asked how I could drink that shit. The reason we were all at the motel that night to meet with Janice was for the purpose of a cattle call for her, somethings guys have been doing forever.

In Janice's case it was in reverse. She wanted to look the goods over and pick the one she wanted. On that particular night I guess I didn't strike her fancy. I didn't know whether to feel lucky or insulted. Anyway, that's why I started drinking Southern Comfort, which is a lethally sweet alcohol in your choice of 86 or a 100 proof. I drank the latter.

As the possibility of making another album became more of a reality in 1968, I thought long and hard about the enormous amount of controversy some of my song writing had created with Verve. I thought that possibly using other people's songs might be a worthwhile change if I actually did another album.

I can't really remember how much I discussed the subject of doing other people's songs with Steve Clark and Bob Ross, but in fact it did become reality in the end. There was also something else that played into the final outcome, and that was that I used to sit at the piano and actually play and sing these songs like a live solo performance.

"Color Him In" had been created using a lot of overdubs. That means, if you are not familiar with the term, that the musicians played the music without me singing. When they were done, we would all listen to what they'd recorded on earphones, and then add my vocal, background vocals, and other things to the recorded music after the fact. It's a common way of recording, but a lot of the time it kills the performance of a live session.

In the case of "Working," one of the things I wanted to do was make it more of a "live" performance. The fact that I could, and did sit down and play these particular songs, was one of the reasons the selections were chosen in the long run. There were three songs written by me, "Palo Alto," "Broken Windows," and "Bout Being Young." I figured that no one could be upset by these songs for being "out there."

If anything, those three songs were as easy going as I could get. "Palo Alto" was my answer to Jimmy Webb's "Wichita Lineman," which I thought was a masterpiece. "Bout Being Young" was my attempt at a Dean Martin impression, after hanging around his house for all those months with his daughter Deana, who I had dated. "Broken Windows" was just a country song I wrote for the hell of it.

The rest of the songs were things I liked to play, with the exception of "Gentle On My Mind." The reason I cut the song the way I did, was because of Joe Cocker's version of The Beatle's "With A Little Help From My Friend's." If you are familiar with that rendition, you know that Joe Cocker made it into a hit, doing it his way. So that's how my version of "Gentle On My Mind" came about.

Don't get me wrong I actually played this song a lot before I cut it, but the Glen Campbell version was hard to top, so I reworked the song, on the basis I outlined, for a different approach and feeling. The rest of the songs on the album all have a story as well, and I will go into them in subsequent posts.