I awoke from my morphine dreams to the sounds of the hospital. I looked down at my legs and casts thinking, "Man, I sure fucked myself up this time." The dull throbbing pain was still hammering away as I tried to figure out my life.

There was so much damage at this point, that I wondered if I wasn't just totally nuts. The past nine or ten years hadn't gone too good, I thought, as I tried moving my feet inside the casts.

No such luck. They were frozen there like two chunks of ice. I stared down at them for a long time, wondering how long I'd be like this. After a while I drifted away, back into the softness of the morphine.

When I was a kid, back in 1957, in Tucson, AZ, I stood in front of the bathroom mirror, combing my hair into various styles trying to get it just right, so I looked like a rock-n-roll star. With a cigarette dangling from my lips, I was suddenly startled by the sound of knocking on the door.

"What are you doing in there Bobby?" came my mother's voice, "You've been in there for 30 minutes. You better not be smoking in there," she warned. I knocked off the burning tip of the cigarette into the toilet and flushed it. "I'm not smoking," I lied, "I'm just going to the bathroom."

"Well hurry up, for God's sake. Let somebody else have a turn." I wildly waved a towel at the open window trying to make the smoke go out, saying, "OK, Ok, I'm coming." I reluctantly opened the door and exited the bathroom, hoping my mother wasn't going to run a smell test for smoke.

I headed for my bedroom and the record player, choosing a Presley tune called "Baby Let's Play House." As the music filled my room I was swept up in the driving rhythm and started moving like Elvis, I hoped, losing myself in my dreams.

After a day or so, my mother, one of my brothers, and Carol Paulus, came to the hospital. I wasn't all that glad to see them because of the circumstances, but it stayed pretty low key. I attempted to explain the various points of damage to my body as they stared at my legs and the casts.

"God it looks so bad," said my mother, "I didn't know it was this bad." "Yeah, I guess I really screwed myself up," I said, but I was lucky on two counts.

Number one, the roof had a little give to it, so I wasn't permanently crippled or killed, and two, I was operated on by a visiting orthopedic surgeon who happened to be at USC, and chose to take on my case for future publication in a medical journal. They seemed pleased with this information. We visited a little more, until I drifted off again.

Like I said, back in 57, I hoped I moved like Elvis, because my brother Bill and I were going to perform at Cal Rubin's Furniture City on Speedway Blvd. in Tucson that evening. We'd been doing that each week for a while now, ever since we'd won a talent search they'd sponsored.

We were The Macdonald Brothers then, and tried to look and act like The Everly Brothers. We had matching black Harmony guitars and shirts, and we knew some good songs, Be Bop A LuLa, by Gene Vincent, being one of my favorites.

Along with well known songs by everybody else, we'd stick in one of our own too, just to see how it went over. Back then, for a couple of hours a week, we were real rock-n-roll performers.

If it weren't for the morphine they were giving me in the hospital every few hours, I would have gone into withdrawl from all the other drugs and booze I'd been using. The constant dose of the pain killer, though, saved me from that particular ordeal.

The fact that I'd managed to survive two comas, and a bone crushing fall, in a matter of months, was somewhat of a miracle in and of itself, and would have caused most people to celebrate it as such. But inside my head was not like the inside of somebody else's head. This was my mind, and it was broken.

There was no deep realization that I'd been spared for something better, or that my guardian angel had saved my life three times in a row. In my mind, this was just some more of the same weird shit that always happened to me.

If anything, I viewed my circumstances as par for the course, and had no plans to change a thing. I vowed to myself in that hospital, that I'd keep going, and with a vengeance.
Posted by Bobby Jameson at 9:46 PM 4 comments: 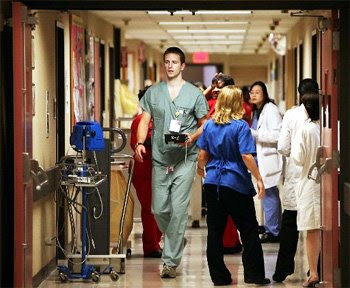 "Yeah, OK Doc, I'll think up safer ways to be pissed off." "There you go," he said smiling, and turned and walked off through the ward. Later, a nurse came by with a shot of morphine, and I soon drifted off to another place....
Posted by Bobby Jameson at 1:22 PM 1 comment: