(part 80) GETTING THE TEMPO RIGHT? 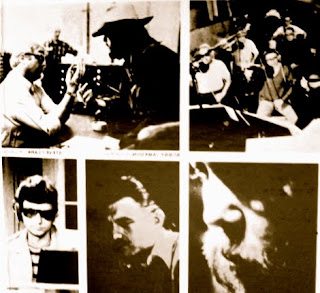 The other songs on "Working" are "Don't Think Twice It's Alright" by Bob Dylan, "Ain't That Lovin You Baby" by Jimmy Reed, "Singin The Blues" by Melvin Endsley, "Norwegian Wood" by Lennon and McCartney, "I'll Be Your Baby Tonight" by Bob Dylan, and "The Weight" by Robbie Robertson.

These 6 songs plus the 4 previously mentioned, Gentle On My Mind by John Hartford, and Palo Alto, Bout Being Young, and Broken Windows by me, make up the 10 songs of the album. As I said before, these songs were songs I used to play at the piano by myself. They weren't just songs I picked out of nowhere.

Many of the songs I wrote were just written and made into demos and that was that. Each of these songs were things I played over and over, so they had a performance history in my life. The trouble with this, where the album was concerned, was that I learned to play these songs the way I played them, not the way they were written.

So when it came time to record these particular songs the players would tend to play them in the meter or tempo that they believed was correct. I on the other hand had developed a live performance tempo and meter that was at odds with the musicians reading of the songs for the basic tracks.

One of the drummers, Jim Troxell, a very good drummer, ended up not playing on the album. He and I got into a pretty good fight in the studio over the tempo and meter question. Jim, who I'd recorded with before, refused to alter his meter to my way of doing the songs.

He kept telling me not to tell him how to play, and I kept telling him to play what I was doing, instead of telling me how to do it. This was the first time I'd stood my ground with a top musician. I had always considered them to be better than me. It so offended Troxell that he packed his gear and left. Toxi French then became the drummer for everything on the album.

No one else seemed to think this was a reason to quit the session, and it was a small but significant victory for me, in that I refused to have the meter changed for the sake of perfection. I was more interested in the recordings sounding real, as opposed to sounding perfect.

I have played with some incredibly gifted people, but studio players have a tendency, at times, to almost be too good. The Band and Crazy Horse would be two examples of "play it for real" not for perfection. The perfection comes from the "real." This subject of tempo, and/or meter, presented ongoing problems in constructing the basic tracks, or musical tracks, for the album.

Every time we'd get into playing the tracks, prior to cutting them, I'd notice that the tempo was changing, and the songs were sounding different than the way I wanted to play them. All my vocal inflection would have to change to suit the tracks, rather than the tracks supporting the way I sang the songs.

Many would say that the album suffered because of this, but I would disagree. The arrangements on some of the songs are not to my liking, but the vocals on a number of the songs are dead on. Had I been able to have more time, as well as control, in constructing all the elements, to enhance each other, the album would have been markedly better. But back then the Goddamn money clock kept running, and I was limited in doing the best I could.

My way of solving the meter problem once and for all was to play all the songs on the piano, by myself, and record them solo. Once that was accomplished, the arrangers, there were 3 of them, and musicians, could do their stuff to what I had done, rather than visa versa. This was completely ass-backwards, but the more it was discussed the more everybody seemed to think it could be done.

Fortunately most of the players had played with me before, and were willing to go the extra mile to get it right. Jimmy Burton, who played Dobro guitar on the sessions, had never played with me, but was willing to go along with everybody else. The "Working" sessions, in 1968, were the first time Jerry Scheff and James Burton ever played together. Later on, this resulted in Burton contacting Scheff to play bass In Elvis Presley's Las Vegas show band, which Burton put together.

Another first timer for me in the "Working" sessions, was the legendary steel guitar player Red Rhodes, who did some incredible work with James Burton on "The Weight," "Broken Windows," "Norwegian Wood," and "I'll Be Your Baby Tonight."