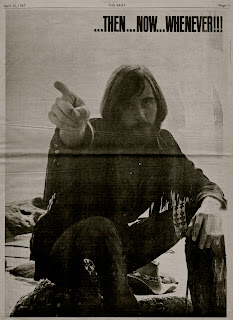 Fortunately or unfortunately, as the case may be, I am telling my story. The argument I am having with myself, and some of you, is a carbon copy of the kinds of arguments I was having with Verve Records, Steve Clark, and others at the end of 1967 over the direction my next album would take.

I am not continuing to talk about the subject of "free speech" as a side issue to the story, it is a central issue of the story. In 1967 Verve Records was the label I was on, but the exective hierarchy wanted to decide what I could or could not do as a follow up album to "Color Him In."

I was always told the album didn't do that well, but I had a vague suspicion the record had done better than I was being led to believe by those at Verve. Because of this, I wanted to have a say about the songs and production of the next album. Verve was unwilling to grant me this freedom of expression.

It soon became a battle over free speech and artistic freedom. As an artist, freedom, and the right to it, is a dominant point of my story. I suppose if all you wanted me to do was simply talk about Chris Lucey and "Songs Of Protest And Anti Protest" and "Color Him In," and how they were made, then in essence the story is over.

But from a wider perspective the story has actually only gotten started. In 1964 I recorded "All I Want Is My Baby" in England, for Andrew Oldham. I had no say about the song or anything else that went on. I just cut the record the way he told me to, and was dissatisfied with it. On returning to America, in 1965, I was relegated to writing songs to someone else's titles and took on the name of Chris Lucey.

There was no free speech involved there. I was merely hired help. But "Vietnam/Metropolitan Man" on the other hand was an act of free speech, even though both songs were censored by Mira Records, because of subject matter. Each of those songs would have been forced into obscurity if not for their appearance in the movie "Mondo Hollywood."

Subsequent to that, none of my records were given an opportunity, on merit, to be heard or judged by the public at large, so for some to question my discussion about free speech and artistic freedom would seem to fly in the face of a problem I was constantly faced with. By the time I got to the follow up album to "Color Him In," the subject of freedom of speech was at the very heart of the entire matter with Verve.

What I asked for, in fact what I demanded, was the right to say what I wanted on the second album. I had paid my dues, in my opinion, by that time, and needed to be given some sort of artistic freedom with which to create a work that was not only controversial, but ground breaking in it's concept and execution.

I had gone along for years doing everything the way someone else wanted me to do it. But by 1967-68 I had made a decision that that would change. It was an exercise in "freedom" for sure, but also one of futility. Verve was afraid of what I wanted to do with the second album. They had heard some of what what I recorded, but decided not to release it, and to this day still refuse to give me copies of my own work.

In the past 2 years or so Verve/Universal was contacted on my behalf, and characteristically would not give me a copy of my contract with them. The excuse they gave, was that their contract was with Steve Clark and Our Productions, both of which no longer exist, and not with me. So this is not a vague unrelated rant by Bobby Jameson on his blog. This is a 40 year old ongoing controversy about the rights of an artist/writer, and the moral and ethical obligation of a label to right very old wrongs. In the end, neither I nor Verve/Universal could come to any agreement.

As of today, I still do not know what the legal ramifications of the split between Verve Records, Steve Clark/Our Productions, and Bobby Jameson were or are. I have never been paid a penny by Verve for "Color Him In." Not as an artist or its writer/composer. I have never been given an accounting of any kind by the label for the album. My break with Verve Records, in 1968, became the basis, in an odd sort of a way, for my next album, "WORKING."
Posted by Bobby Jameson at 1:11 PM 1 comment: