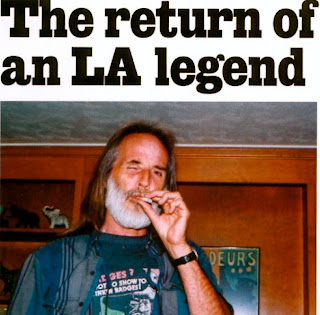 Reality is a stubborn thing! When unwavering and steady in it's grind, it is easier to cope with no matter how stark it may actually be for the one experiencing it. The fact that it stays the same and doesn't change overtime, makes it easier to accept. But in my world, and in my life, reality had a nasty habit of changing completely. Things that had been one way for a long time suddenly shifted in front of me to a completely different place, due to outside influences beyond my control. Such was the case on the day Steve Stanley called, in 2003, after hiring a private detective to find me. Had I wanted to be found I would have told people where I was, which I hadn't done, so it is a simple fact that I state here.

What had become routine for me, although dreary as hell, was suddenly pushed out of the foreground to make way for a whole new set of circumstances for me to deal with. I was not asked before it happened, it just happened, and I was forced to deal with it. In reality, looking back now, I wish I had just hung up the phone and not spoken to Steve Stanley. The hook into me was the part where he said the record had been released. It got into the soft part of my flesh through the old door to dreamland and fantasy. Fact is, I did talk to him, repeatedly, because I was weak and wanted to believe in the same old story, the same old promise, the same old lie. For as much as I had learned and changed, in reality, I had not learned or changed at all. Bottom line, I was still Bobby Jameson wearing Chris Lucey's shoes, and that first telephone call proved it.

Chris Lucey! The name was even a fake. It was someone who didn't exist, other than in the form of a 1965 album that nobody ever heard of. But I was the guy who made the album, after Surrey Records parted ways with the real Chris Ducey over contract problems and was forced to kill the release of the original record. The previously faceless, nameless voice of Bobby Jameson was now unearthed as the person behind the creation of the album Songs Of Protest And Anti-Protest some forty years later. You could tell me reality didn't shift, but I watched it happen. Of all the work I ever did, this album would have been last on the list of possibilities I ever imagined I would be remembered for.

In 2004 Steve Stanley wrote an article for Mojo Music Magazine which can be read here. It heralded my reluctant return to the world of the infamous and slightly remembered. I refused to let him record an interview saying I thought he had enough material from talking to me over time to write it, which he did. I had grown weary by that time of the circular nature of the answers he was giving, regarding Rev-Ola, Joe Foster, and the others involved in the cd's release. I told him I would only authorize the article if it clearly stated that I had never been paid for anything, which he agreed to.

I had attempted, with little success, to enlighten Steve as to the real story behind the album's creation in 1965. When Steve informed me that Ace Records had acquired the master from Betty Chiapetta, at Surrey, I told him that she had no right to sell the master because of the inherent legal problems surrounding the creation of my version of the album. My position fell, to a great degree, on deaf ears, so my enthusiasm for the release continued to wane. Each time I made a specific point about the facts, such as the song rights, I found myself frustrated by the response. I had no voice with those I was talking about, I only had Steve Stanley's ear. I repeatedly asked him why Joe Foster refused to talk to me, and why he wouldn't send me a few cd's? The answers were mostly, "I don't know, I'll ask him."
Posted by Bobby Jameson at 2:36 PM No comments: