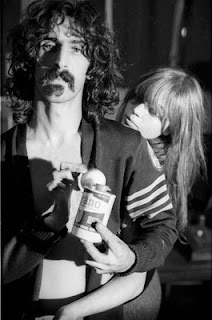 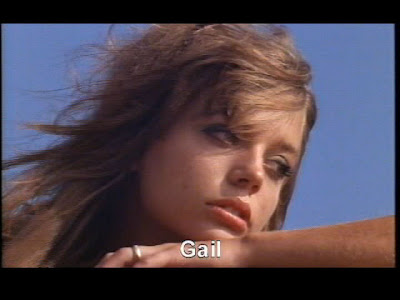 I started going up to Zappa's house in Laurel Canyon and writing songs on his living room floor after Frank and me made a couple of records together. Most of what I wrote there was a lot of stuff used in the making of Color Him In, though at the time I had no idea that would be the case. I just liked hanging around with Frank because all either of us did was work all the time.

We didn't talk a lot, because we were busy doing stuff and were both comfortable with that arrangement. But on one particular day Frank did want to talk and it was about my girlfriend Gail. Gail use to go with me to Frank's and just hang out while we were working on music or Frank's film. I knew she and Frank got along well and that was fine with me. That afternoon when he asked if he could talk to me about something it was different than all the other times Frank and I had been together.

I could tell it was important to him so I really gave it my full attention. Like I said, it was about Gail. I could see he was having a tough time getting to the point and I realized it was because he didn't feel too comfortable bringing up the subject. "I know Gail's your girlfriend," he said, "but I wanted to know how serious you were about her?" "I don't know Frank," I answered, "I just kind a hang around with her you know. I don't think I'm too serious about her other than we just like to hang out, why?"

"Well," said Frank, "I really like her and I don't want to cause you any problems, so I thought I better ask you about it and..." "Hey man, no problem," I said, "If that's all it is don't worry about it. You can do whatever you want. I'm not gonna be bothered by it." Frank stared at me for a second or two and then said,"Really?" "Really man," I said, "it's OK. If you like her and she likes you then whatever you guys decide to do is fine with me." He seemed immediately relieved and that was all that was ever said about it.

Gail was living with me up at the house off Woodrow Wilson Drive, where all the LSD was being sold. I don't think I ever remember Gail getting loaded much. She just happened to be around people like me who did. I had a bedroom at the house, with a bathroom attached that was directly across the hall from the front door. On one particular night Gail was in the bedroom and I had gone into the bathroom to write.

I used to sit up on the sink. It was big, and I'd lean against the wrap around mirrors in there and write lyrics. On this one night I dropped some acid and was waiting for it to kick in. While I was noticing the first waves of getting loaded, I heard this loud pounding on the front door about 12 feet from where I was sitting. The next thing I heard was a huge crash coming from the hall outside the bathroom where I was starting to hallucinate.

I jumped off the sink and went through the door to the bedroom where Gail was now standing at attention, it appeared, and staring wide eyed at something. The look on her face was fear, but I didn't know about what. I was hallucinating so much at that point I couldn't figure out what was going on. I heard something like yelling, but I couldn't make out what it was or where it was coming from. I just kept moving around the room trying to put the pieces together when all of a sudden I heard clearly, "Stop moving or I'm going to kill you!"

I looked in the direction of the sound and into the barrel of a 12 guage police riot gun which was aimed at my face. The guy with the shotgun was shaking and yelling for me to quit moving. If you can imagine, try to think what a 12 guage shotgun barrel looks like when you're hallucinating on LSD. All at once reality slammed back into my consciousness. We were in the middle of a drug bust and this guy was an undercover plain clothes narc! Fuck! What a trip!

I was hallucinating like a son-of-a-bitch and was in the middle of a drug bust with a guy about to shoot me. Finally I stopped moving. I stood deadly still at that point and glanced over at Gail who looked like she was gonna have a heart attack. This was one of the worst nights of my life and I'm sure hers too. It went on for hours while about 14 cops went through everything in that house.

I sat handcuffed on the floor and just tried to keep remembering what was happening and that I was on a drug. I kept saying to myself over and over again, "Don't lose it Bobby, don't freak out or these guy's are gonna kill you. Keep it together man, keep it together." I think that was the last time I saw Gail until the 70's when I ran into her and Frank at a recording studio. She was then Gail Zappa, and wanted nothing to do with me.
Posted by Bobby Jameson at 10:30 PM 6 comments: