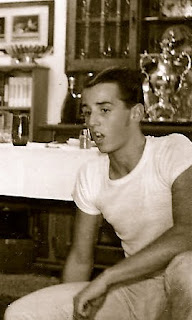 As a kid, fame to me was the obvious answer to everything. I had no money, I didn't know how to do anything except sing, and I wasn't planning on an extended education.

If I could make a record, I believed it would be a hit, so for me that was my path, to get someone to record me. This may sound foolish to some, but no more that a poor black kid believing that an NBA or NFL career would solve his problems. In the mind of any young dreamer this was powerful stuff--"to believe."

With this in mind, you can possibly understand, not only the importance of this belief, but the framework this belief was cast in. I had a talent and that talent was my life's answer.

This wasn't a vague belief or secret little dream with me, this was an up front, end of story, concrete decision-making arrangement. I quit high school to pursue it, and didn't consider anything else, ever.

My dream worked, except for the part about getting paid. It had never occurred to me that I wouldn't get paid, back when I was dreaming about all of this. Looking back on it now, I wish I had thought about not getting paid, then I could have incorporated it into my entire dream at the time.

Being young is a powerful thing, and I accomplished a lot early on. But because I didn't know how ruthless life could be, I left out key parts to my request of the "Dream Machine." This is the folly of the young and impatient, which the older and more devious among us prey on.

In my case the older and more devious came in the form of one Tony Alamo. Tony made me famous alright, and he also kept me broke. My once perfect Hollywood dream was to become my long-term and deadly Hollywood nightmare.

These thoughts, and others like them, were what I ended up dwelling on to the point of madness. The young kid with a dream, and the ensuing repetitive rape of that kid by fast talking con men. It haunted me day in and day out for years.

Those whose only talent was to package and sell the dreams and hard work of others, and then pocket any and all of the gains, would become my sole obsession of scorn in the end.

This illness of greed, which I encountered almost without exception from the beginning in the music business, was the single most damaging aspect of my life next to addiction.

What I was left with in the end, was a version of semi-fame, co-created as a result of those one sided arrangements with no money. The continuing rationale for this, by the so called producers and packagers was, "If it wasn't for me no one would know who you are," as if being merely "known" would pay your rent and feed you. I was known alright, but I couldn't even afford to be alive so I could be "known."

Had I never made a record and just worked a regular job, I would have made more money than I did making records, even if it had been a shit job at a car wash or as a busboy. To realize this was true, over and over in my mind, gave rise to the most intense form of anger I could possibly imagine.

Over the eleven years, from 1963 to 1974, I literally drowned in the facts of what my personal reality in the record and publishing business had been.

To view these people in public, and to repeatedly come in contact with them, knowing how they truly operated, drove me into a place of darkness where I could not live without losing my mind.

I drank and used drugs to obliterate myself, and in the end I turned on myself, as well as them, in an explosion of threats and exhibitions of unbridled rage.

After years of trying to force-fit this sick logic into my head, and failing, I went crazy. Piece by piece, this dehumanizing form of slave labor imposed upon me by the likes of Tony Alamo, Andrew Oldham, Randy Wood and Abe Sommers, Ken Handler, Steve Clark, the Cohen Brothers, and others, along with the companies they represented in one form or another, finally pushed me into despair and gave birth to a madman seeking to even the score.

So I was famous, or more accurately, infamous. It was the one thing I knew I owned for sure. Bad, good, or indifferent, I possessed it, as it surely possessed me.

The more I had raged in public, the more cover I created for those bastards to hide behind. They sat back and watched me self-destruct, and then pointed to it saying, "He's nuts, he's only got himself to blame," as if they had nothing to do with it.

I could not stand it. "OK", I thought, "I'm fucking crazy, so what can I do to really piss these assholes off that is really fucking crazy?"
Posted by Bobby Jameson at 9:55 PM 3 comments: