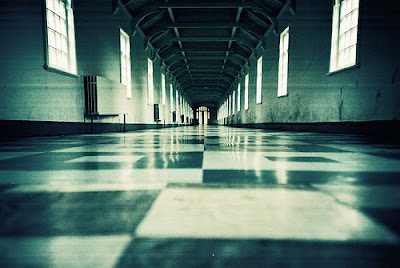 Anti-psychotic medication, such as Haldol and Mellaril, can cause psychosis in a person who is not psychotic in the first place. In Camarillo, that was what was happening to me.

A doctor, or doctors, had decided, on some basis, that I should be placed on anti-psychotic medication, which was quickly causing me to become psychotic.

The more I was given, the worse I got. When I say worse, I mean paranoid, beginning to hear things, unable to finish sentences, terror, and a growing inability to keep track of my thoughts.

I would start in on an idea and then forget what I'd been thinking in the first place. I knew it was the medication, and attempted to refuse taking it. I struggled with my words saying, "I don't want it." I labored to repeat myself, "No, I don't want it."

I stubbornly held my ground in front of the nurse's station med window and would not take the medication. The nurse called for staff back-up on a hospital intercom.

In less than a minute, two male orderlies showed up and confronted me in front of the medication window. After checking with the nurse inside about the problem, one of the staff moved toward me and said, "You have to take your medication, Mr. Jameson, those are the rules."

I stood there in a growing state of fear, staring at his face, knowing he meant what he said. I was in no shape to fight them or continue to refuse, I was going to lose this battle either way.

I reluctantly reached down and picked up the first paper cup and downed the contents, then the next, followed by the last cup of water washing it all down. I turned and opened my mouth wide so the orderly could verify that I'd swallowed the contents of each cup.

When it was over I slinked away, fearing I was in danger of losing myself altogether into some black hole of terror.

As I waited for the drugs to act, I anticipated the worst. I was not disappointed. They hit me like a Mack truck after fifteen or twenty minutes, and I felt myself sliding deeper into psychosis and the darkness beyond.

I sat huddled against a wall, trying to gather my thoughts, but they evaded me. I sensed that someone was standing right next to me, but when I looked, there was no one there.

I couldn't figure out where to go. I stood up and started in one direction and then stopped and went in the opposite direction. I stopped again, then started, thinking I'd better go the other way. Over and over, until I just broke into tears, trying to remember what I was doing.

Psychosis is the term used in explaining, amongst other things, breaking with reality. The worse the psychosis becomes, the greater or deeper the break will be.

A psychotic person will find it increasingly difficult to respond appropriately to the situation they are in, and in time may break completely away, as if they had disappeared.

As I fought the effects of the medication, I knew I was beginning to lose myself. I was then summoned to a small office by staff. I sat on a wooden chair in a room, along with a male psychiatrist and a female stenographer.

After locking the door, the psychiatrist began speaking to me and asking questions, while the stenographer took down every word. I was trying to answer, but kept losing my place and would start again.

I continued to struggle, and the psychiatrist was saying, "What's wrong with you? Why are you so weak? Answer my question, you weakling."

I began to freak out and started crying. I tried to explain that the medication was doing something to my mind. "The psychiatrist interrupted me saying, "Nonsense, you're lying to me, what's really wrong with you?"

This went on for sometime until I suddenly got a single clear thought about what was taking place in that room. It will take longer to explain it than it took me to think it.

I realized the stenographer was there making a record of each of my answers for legal purposes. I also knew that my answers sounded incoherent, because of the effects of the medication.

These answers would ultimately be used against me in a legal hearing, to ascertain my own competency. I immediately clammed up. I would not say another word.

Even in the dim recesses of thought I still possessed, I had correctly figured out the purpose at hand. The medication's effects had been anticipated to do this to me, by whomever had prescribed them for the purpose I just described--to use my own confused words against me.

I knew I had to lessen the amount of drugs getting into my system. I had won this round, but they'd be back again. Everything was based on the medication. If I continued taking it in the amounts given me, I would eventually be lost, and God only knows where I'd end up then.

I was finally let let out of the room. I fought to keep my mind cognizant of the one reality--the medication, find a way to limit the medication, "Find a way, Bobby," I said to myself, "find a way." I kept repeating it, over and over, as I walked through the dim corridor.