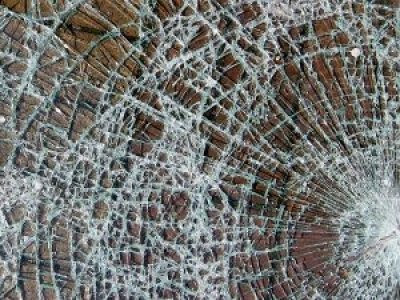 Because the damage to my ankle was so massive, walking without pain was impossible. My desire to be off the crutches, drove me to endure a level of misery, similar I would suppose, to standing on an ice pick with each step.

There was no way to do this without the aid of a mixture of alcohol and pills. My personal demand on myself to walk, only made worse the mental and emotional problems I suffered from, because of the extreme amount of substances I required to tolerate the pain.

I'd managed to get off the heroin, but clung to the pills and booze like my life depended on it. Any thought of quitting that practice seemed absurd to me at the time and was never considered.

I received no treatment of any kind for the myriad of challenges I was faced with. I was still getting a small check each month from ATD, (aid to the totally disabled) from the State Of California, but would soon face the world flat broke again, when cut off.

After some time in Arizona, I suddenly, and without warning, just up and left, as was my practice. Another snap decision that would again prove to be life altering.

In my mind, Los Angeles, and Hollywood in particular, was home, whether they wanted me or not. Hollywood and Bobby Jameson were like two lovers that didn't get along, but had great sex. We always took each other back, no matter how bad the last fight may have been.

Once there, I spent some time at Carol's, and in the house of Donald Lively, a multi-millionaire drunken coke-head from Dallas, who didn't think I was that bad because he was worse off than I was. Don once rented a Learjet for an afternoon, and convinced me to come along.

Somewhere during the flight he offered the pilot $500. to pull the "stick" back, causing the plane to go virtually straight up for a number of seconds. That was his idea of a good time. He later drowned in his own bathtub in Dallas under suspicious circumstances.

Prior to Don Lively's demise, I spent a lot of time in his house getting loaded on cocaine, pills, and booze, while writing songs and trying to reinvent myself for the hundredth time.

Around town I'd earned a reputation as the jumper, and this monicker, hung on me by various well wishers, was something I accepted, because it was not only true in a macabre way, but came with an odd type of recognition.

For an egocentric nut case like me, that kind of notoriety fit right in to my now twisted sense of pride and humor. Something like, "I may be crazy, but you know who I am."

Truth being told, I'd become more famous for climbing up on buildings and jumping off the tower, than I was for being a recording artist or song writer, at least in L.A.

Unfortunately, I was not capable of distinguishing one kind of fame from another, and did not understand the ever more grim state of being I lived in. To me it was all fame. I didn't seem to care for what, as long as I was famous, which proved to be the most insidious of all my weaknesses.

What I needed was some serious psychiatric help and physical therapy, coupled with a stable environment, but what I received was next to nothing.

What I did have, was my own set of rules, or lack thereof, designed for the purpose of catapulting me into the public eye and keeping me there at any cost. I was a lost madman on a continual ride down, with a one way ticket to calamity.

Looking back, there was absolutely no attempt to retrieve the human being known as Bobby Jameson. To the contrary, there existed kind of a cheerleading atmosphere, by some, to glorify my antics as something other than what they were, tragic.

I was guilty more than anyone of promoting such an idea, mostly out of an inability to be honest with myself about the true nature of my insanity, and the reluctance of others to intervene.

Once again, I was loose on the streets of Hollywood spinning wildly out of control. My single quest in life was to beat into the minds of those around me, and those who watched from a distance, the belief I possessed, regarding what I was owed and the wrongs done to me by the music industry.

Driven by my emotions, and aided by drugs and alcohol, I was winding myself up for another insane assault on the world at large. When the damage done is left untreated, then the original damage will be compounded by each successive damaging event.

This was me. A damaged person, untreated, who was incapable of not damaging myself further. In my world, it was like re-breaking a broken window. All that could be achieved was to break the glass into ever smaller bits and pieces, and then go to work destroying the framework the window once occupied.
Posted by Bobby Jameson at 9:49 PM 2 comments: