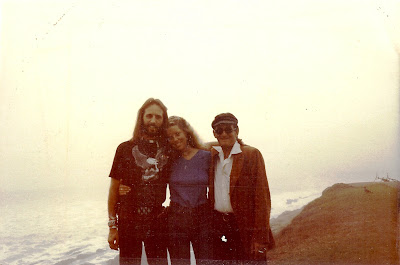 In 1985, wherever I went on the central coast, I'd see little christian fish symbols plastered on car bumpers, windows, walls, everything. It was something that got my attention because I'd never seen so many little ads for christianity in my life. It was a form of shouting, "Hey, I'm a believer!" but in my world it did not mean that those broadcasting the message were peaceful, loving, or fair. To the contrary it was an alert to people like me to "stay on your toes."

Not too long after arriving here, I was sitting in a coffee shop in Arroyo Grande with a young girl friend of mine. A couple of tables away were three big guys eyeing me like a piece of rotten meat. I heard one of them say, "If I ever caught my daughter with someone like that I'd get my deer rifle and fix him!" I stared at them for a long time, making it clear I could hear what had been said and that I didn't give a shit about their opinion. It was like a scene out of "Easy Rider." 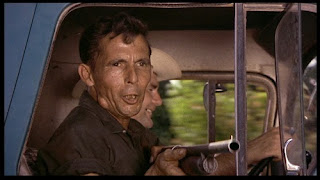 I found it necessary back then to stay alert at all times, wherever I went, knowing that this kind of thinking was aimed at me on a daily basis throughout the area. I had no allies or friends to speak of, except a few others I'd met at meetings who were looked down on the same way I was. To them it had become routine, almost normal, but to me it was cause to counter anyone who showed that kind of hostility toward me, and show it they did.

I was always ready to fight, both verbally and physically. I would not back down, fearing if I did it would bring even more of that crap my way. I had to take a stand or I could not have survived here. In most cases it was always a guy who'd grown accustomed to intimidating people with his size. The other versions were those who used their supposed standing in the community. In each case, it was guys who were used to people taking their shit and following their orders, something I refused to do even once.

More than a couple of times I went at it in public with these yahoos, turning the air black with verbal counter assaults. Unprepared by-standers watched in silence with their mouths open as I went after these jerks in grocery stores, coffee shops, or wherever the need presented itself. I never started it, other than to just show up, but I was perfectly suited to finish it.

The more they pushed on me, the more I stood up to them. Where once I had wanted to leave the area, I became determined not to be driven out. In 12 step meetings those who had once felt out of place and alone now began seeking me out as a refuge from the entrenched belittlers at large. I befriended the friendless and protected the unwanted. I made it clear that if you went after one of them I would publicly take your ass apart verbally, which in all reality was not that hard to do.

When you're wrong you're wrong, and these guys were dead wrong. They glorified themselves by demeaning the week and unwanted. Even though I could have spared myself a shit-load of trouble, it was impossible to sit by quietly and watch this garbage continue. The things that were said, and those who were saying them, were an affront to everything I'd read in the book Alcoholics Anonymous.

So this is the way it started for me in San Luis Obispo County and the Five Cities area back in 1985--a wake-up call for sure. An L.A. reject trying to find my place in the world, a world completely different from the one I'd left behind, a world where I was not welcomed or wanted.