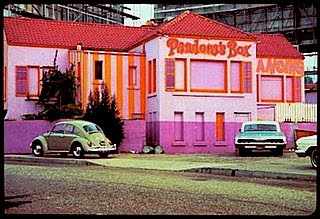 In 1966 I was at a crossroads in my life. The war in Vietnam was raging out of control and was taking it's toll on America. There was a growing split between the anti-war forces and pro-war forces, and both sides were taking to the streets. Many of the arguments for war today were heard in the 60's. They are as wrong now as they were back then. There's one reason to leave and a thousand reasons to stay. It takes a lot of guts to leave but it is the only way to allow what is going to happen to happen and then heal.

In the 60's it was the same question. The streets of West Hollywood and Hollywood saw their share of huge violent street demonstrations against the Vietnam War. I don't think I missed any of them in all the time they were happening. I knew in my heart that I had been spared going because I'd been busted for drugs, but I couldn't just forget about Vietnam simply because I didn't have to go.

Sometimes on the "Strip" guys who were just out of boot camp would show up to beat up on "hippies" who they regarded as "pinko commie fags" and cowards. We actually had a gang who were always ready to go at it with these jerks when that happened so there was a lot of street fighting in the middle to late 60's over the war.

At the intersection of Crescent Heights Blvd. and Sunset Blvd. there was an island in the middle of the street. This is where "Pandora's Box" was located. Across the street was the "5th Estate" another well known 60's coffee house and "hippie" hangout. We fought with 1,000 or more L.A. cops and sheriff's officers one night over the war, and a newly imposed curfew and loitering law. It would make sense to keep this in mind when thinking back to all that the 60's had to offer.

There were real people who had real ideas about important things that swept this country into turmoil back then. It was by no means just a drugged out musical dreamworld. The drugs and music were always present but so were a lot of other ideas that represented the dynamics of the time.

I showed up at the Vine Tower to meet Steve Clark and Curt Boettcher at the arranged time and was unsure of what to expect. I had been told by Phil Turetsky, as I said, that Steve was an easy guy to get along with and that turned out to be the truth. He may have been a little too easy to get along with. None the less, I was welcomed into Steve Clark's world of Our Productions as a long lost child and felt immediately at home in those surroundings.

I told him about the "Monkees" TV thing and said I was up for a part in it and had to make a decision one way or another. He asked what was holding me back and I told him I was somewhat reluctant to end up a TV "bubble gummer" no matter how good it sounded. Steve was vaguely aware of my past and asked about the Billboard ads and Tony Alamo. He was also interested in the fact that I'd recorded with Mick Jagger in London.

We talked about my goals in the music business for awhile. Steve asked if I wanted to meet Curt Boettcher who was waiting in another office. "Yeah!" I said. While Steve went to get him I tried to anticipate what he would be like. When Curt showed up at the door saying, "Hi!" I knew he was nothing like I'd envisioned. He was not an arrogant record guy at all. He was small and fragile looking, like "Peter Pan" and had one of the most friendly interested smiles I had ever encountered.

He introduced himself to me and I returned the introduction as we shook hands. His voice was almost like a child but filled with interest and respect. He spoke to me as if he were thrilled to be there and appeared to relish every moment of the time we spent together that day. He asked about my music and I told him the best way for me to explain it was to play it for him which he was eager for me to do.

We sat in that office for an hour or more and I played song after song for him that I'd written in the past year or so. There was nothing I played him that he didn't like. From "Jamie" to "See Dawn" and "Candy Colored Dragon," etc., he was just pleased about what he heard coming out of my mouth. "We have to work together. I can already hear the arrangements for everything you're playing," he said.

He was like some frantic genius in full animation in front of me. His excitement was catching and I began to get excited right along with him. I seemed to know at that moment that Curt and I were destined to work with each other from that time on. Our Productions would be my new home and Curt and Steve Clark would be my new best friends. When Steve finally came back to join us he could see how well Curt and I were hitting it off. "I guess every things OK?" he said. "Every things wonderful," said Curt, "better than wonderful!"

There were a lot of details to work out before our new arrangement became a reality. I told Steve that I hadn't made a penny up until then and that I was bound and determined to get paid something before I said OK to any more record deals. He asked what I was talking about money-wise, and I told him I wanted a $100 a week for a minimum of a year. This may sound like a very small sum now, but from where I was coming from $100 a week for me was a fortune. Steve looked at me and smiled a big "Dennis The Menace" smile. That's what Steve Clark looked like. A huge "Dennis The Menace." He said, "I don't think that's a problem."
Posted by Bobby Jameson at 11:58 PM 7 comments: