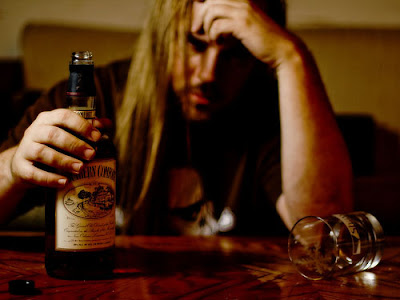 When I came to, after passing out from exhaustion and drunkenness, the thoughts about what had happened, and the feelings of remorse slammed into me like a train wreck of regret.

I could not believe that what I'd done the night before was real, but it was. It was absolutely real, and sent cold chills through my body, as I looked down at the deep cut in my wrist, put there by the jagged glass from the jewelry store window.

I had a hangover that enveloped my entire being with a sense of fear and foreboding. I rushed frantically around the living room of Carol's house, desperately searching for a bottle to quell the screaming demons in my head.

Finding it, I began chugalugging straight scotch to ward off my growing sense of remorse. I gagged repeatedly, as the warm alcohol burned it's way into my empty stomach. I went back for more and more, until I felt the first wave of booze hitting my battered brain.

I fell back into the deep sofa where I had slept, and sat there like a zombie staring at the bottle in my hand. With each passing moment the alcohol did it's job of freeing me from the dark reality of my own actions from the night before.

I began reclaiming the lie that had caused me to violate my own moral code, and to reinforce my dread with false courage from the bottle. I looked around the living room, and watched the afternoon sunlight stream through the windows from the west.

The day was coming to an end as I was coming to. I had crossed a line by stealing the jewelry and knew it. I'd gone directly and irreversibly against myself the night before, and had forever lost something of real personal value in doing so.

Never again would I be the same. I would now know that I was one of those who had given away integrity, trading it for a few pieces of silver.

I took another drink from the bottle, and stared off into space, while filling my head with one lie after another in an attempt to exorcize my sense of guilt and disappointment. With each passing moment I rejected reason for another self-serving justification for what I'd done.

Over the next couple of hours I reconstructed a world of lies into a framework of self deceit, where I could be king of nothing and call it something. Somewhere deep inside me the light of who I was had been all but extinguished.

This may have been a first for me, but in no way would it be the last, in a succession of bewildering and criminal acts carried out by me in 1975. I unfortunately maintained this hard edged form of perversity all the way through that year and beyond.

It was as if I'd ceased being me altogether, and had taken on another person and inserted him into my body. I immersed myself into a world of criminal consciousness, and spent as much time as I could with those I'd met through DP.

What separated me from this particular group, and literally caused them to tolerate me and my insanity, was the simple fact that I could play music and write songs.

At times I'd sit in their homes and make up songs about them, some of whom were total strangers. I would sing the songs, and they would wonder and ask, how someone like me could come up with such personal things about people I just met, and have the songs be not only accurate, but something they liked hearing.

Because of this, and this alone, I was accepted into their midst as if I possessed some sort of magic, that in their opinion, validated me in a special way.

That faint, but ever present spark of who I was, never left, it had just faded from prominence and become more of a clever sideshow I used to ingratiate myself into this basically closed society of people.

Every one of them thought I was one of the craziest persons they'd ever met, but overlooked it because of their fascination with my ability to simply switch to this other personality and perform for them. They'd give me drugs and fix me a drink and say, "Go ahead and play Bobby, play for us."

Back in the 50's and the early 60's it had always been the music that allowed me to dream my way out of any circumstance I was faced with. It was the magical ability to see past where I was to where I wanted to go.

With a guitar, a pen, and a sheet of paper, I could literally lift myself out of one world and into another. This was the trick, one that I found that I could perform over and over.

My desire and need to write songs, play, and then record them, had given me a concrete path to walk, on my way to a new and different world than that of Tucson and Mesa, Arizona, and later from Glendale to Hollywood, California.

I would simply dream my dream into being, and place myself in exactly the world I had decided on.

But somewhere along the line something had changed. Now my ability with music had made me into a performing monkey in search for nothing more meaningful than a handful of peanuts from the occasional crowd who gathered on a street to nowhere.
Posted by Bobby Jameson at 9:07 PM 3 comments: