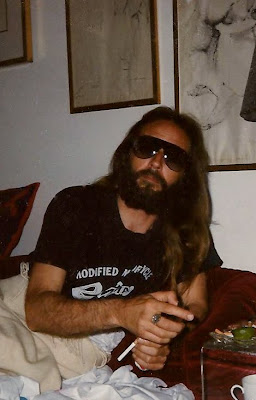 Me at Carol Paulus's apartment 1985

In L.A., in 1985, I was engulfed in the writing, playing, singing, and recording of half a dozen, or more, new songs.

I'd taken over Carol's den and made it into a mini recording studio, as well as my bedroom. It was more like a prison cell with instruments and speakers than anything else.

I would lay down a guitar track first, in most cases, with each new song, and then begin the tedious job of adding other instrumentation and my vocals. The bass and drums were played, by me, on a keyboard with various voices, as they're called, or instruments built into the keyboard.

Learning to keep track of everything at once, drove me crazy at first, but improved as I kept at it. When I'd overdub something, because I was working with analog equipment, I'd pick up a lot of tape hiss from the recording heads.

I had to EQ it out of every track I added to keep the recordings as clean as possible, and not let that build up. It wasn't like I had real good equipment, so hard work and patience proved invaluable over time.

On Voodoo Blues, which was a basic Bo Diddley beat, I used a tremolo effect on the electric rhythm guitar parts. The maracas, or shakers, were actually a bottle of vitamin pills I used for that effect.

On the lead guitar parts, I used a Rockman effects box, which could also be used for various reverb, distortion, and echo effects.

For those who haven't worked with analog, or don't know what I'm talking about, I'll try to explain.

In analog tape recording you literally have a piece of magnetic recording tape running across, what are called recording heads on the tape recorder, which cause noise or hiss on the recording.

Initially that's not too much to worry about, but as you add more tracks, overdubs, you begin to re-record the initial noise, or hiss, picked up from the previous tracks recorded.

You can use Dolby to knock the hiss down, but it squashes a lot of the good sound you may want to keep, so I don't use it. That is why I had to EQ, or equalize, each separate track with a piece of equipment called an equalizer.

It was imperative to do this on some songs more than others, to ensure in the final outcome that I didn't end up with recordings that had enormous amounts of hiss on them.

Once I added a new track to the recording, I had to make sure it was OK, because I could not go back later and fix it. It became part of the overall recording as I went along. I only had four tracks, so I had to keep combining tracks to create room for another overdub track.

As you might imagine, this kept me on my toes, and tense as hell, while engaged in the effort of recording. Any outside distraction would cause me to lose sight of what I was doing, or worse yet, get recorded onto tape as I tried to overdub.

These kinds of distractions were: telephones ringing in the middle of recording, airplanes, dogs barking, someone bursting through the door, or knocking on it, etc.

Voodoo Blues was fortunately a purposely noisy recording with high-end noise, like the maracas, which could join in with unwanted sounds, such as hiss.

Again it was a blues song, and once more, deterred Carol from any real support for what I was doing.