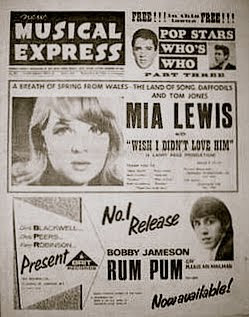 I worked on various songs to record for Brit. They were more along the lines of "All Alone", "Vietnam", and "Gotta Find My Roogalator", which I recorded when I went back to America in 1965. They are also on my myspace site currently, which you can go to by clicking on a myspace link at the top of the page.

I had zero luck at trying to convince the powers at Brit to go along with me, which was another disappointment in my English adventure. I had also written a song called "Rum Pum Mum Num Dip Ta Dip, which was shortened to "Rum Pum" for the record. It was an overly cute song using old nursery rhymes strung together, and Brit loved it. They also loved another better song called "I Wanna Know" for the B side.

It was recorded with about a third of the players from the London Symphony Orchestra. It was a long way from Bobby Jameson and his guitar in his bedroom singing Buddy Holly songs a few years earlier to recording in London England with an orchestra of that calibre. It was a hell of an experience, but once again it was not me. It was an overly exaggerated super teeny bopper pop thing and I had a hard time coping with it.

As usual I gave it my full attention and the recording was good, it just wasn't me. The goddamn "Glove" thing was being hyped up to the eyeballs with the new record's release, and I kind of groaned about that, but had only myself to blame for starting it in the first place. I felt like a little dancing puppet all the time running this way and that for whoever was paying the bills, and it became annoying the more I did it.

It had been that way with Tony Alamo, and with Andrew Oldham, and now it was happening again. I felt like a girl with a sugar daddy. Ok we'll pay your rent but you gotta do what we tell you to do. Bobby Jameson, the good little "pop whore." It was a trade off for sure. I wanted something so I had to provide something, and "they" got to call the shots because they had the money and the power.

My life was like a crash course in the music business. In less than one year I had learned a ton of shit about myself and other people. Had it not happened to me the way it happened, I reckon I would be a completely different person than I am now, but it did happen the way it happened and I'm still trying to sort it out. When you're as young as I was at the time, you are transformed by things much more than you would be if you were older and more settled. I didn't know shit, so all of these things affected me deeply.

On top of that I didn't have anyone to rely on, you know, like a person I could talk to about how I felt inside. I was always running around with that "pop star" look in my eyes, so people never knew what I was thinking or feeling. Anyway, I was living in Knightsbridge during this time and every day, like clockwork, Lady Grey would come to my flat and hang out with me for hours. When I say Lady, I mean like "Lords and Ladies", she was "Lady" Grey.

She showed up with her two little Whippet dogs and listened to me play music and talk. I never made love to her, although I believe I could have, I just never did. I can't really remember how we met, but I think it was through Peter Caine. I think she met Peter first and then me. I liked her a lot. She is in my memory forever. Her and many other details of what it was like to be an American "pop whore" in London, in 1964 and 65.

Posted by Bobby Jameson at 11:58 PM No comments: 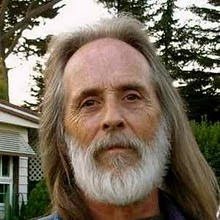 The only answer is I kept believing that the next deal and the next record would be the one that got me to the top. It never happened. For a myriad of reasons, I never crossed over to the promised land.
Posted by Bobby Jameson at 12:38 AM No comments: