(part 51) CURT BOETTCHER AND BOBBY JAMESON: THE MAKING OF COLOR HIM IN 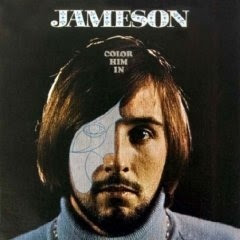 Telling the story about the making of "Color Him In" is different than the previous stories. This album was more specific in it's intention than the earlier recordings I made with the exception of "Vietnam/Metropolitan Man." Work started on the project in 1966 just prior to the "Summer Of Love" time period in 1967 which has been well documented as a central time frame and theme of the 60's.

"Color Him In" was a psychedelic work of the times. Much of what is on the record was inspired by LSD, Vietnam, and the Peace Movement. The overall context was freedom from the establishment or so we thought. It was basically a concept album, but most of the music's conceptual arrangements were Curt's. Songs I wrote like "See Dawn" dealt with duality. "What goes up must come down." The lyric "See dawn, see dawn the setting sun" attempts to look at things from opposite ends of a single spectrum simultaneously.

These pairs of opposites run throughout the work. Curt Boettcher was delighted by this kind of lyric. My words and melodies, according to Curt at the time, were like a playground for his arrangements. He would take the demos I made of me and a guitar, and arrange vocal harmonies and instrumentation around them. He would come up with entire arrangements based on a specific lick or chord progression of mine.

In "Jamie," which has a piano chord progression I used in writing the song, Curt built that progression into the dominant theme or sound for the song. He didn't just have some chords to follow, he made the progression stand out as the specific feature of the entire recording itself. If you listen to "Jamie" you will get the point.

The album was recorded in it's entirety at CBS Studios on Sunset Blvd., in Hollywood. These were very up to date studios in the 60's when we worked there, but were run or engineered exclusively by Union members at the time. This was very problematic back then, because Curt was not even allowed to touch the equipment according to Union rules. Not only was this a nightmare for Curt Boettcher, but for others as well such as Brian Wilson. These guys, Curt and Brian, were better equipped to do the work than the Engineers who were running the equipment, but the rule was only the Union Engineers could run things. What you had, was two young genius's telling these old farts what to do and how to do it. It was a problem, but it also helped change things in the long run.

As far as the cover art for "Color Him In" went, it was Steve Clark's idea. The original picture was taken by Dan White in Hollywood in 1966. Steve thought up the idea about Color Him In, like a kid's coloring book, one evening when we were all drinking. The cover itself has always stood out and in some ways is more memorable than the music itself. I've had people say they didn't really like the record but they loved the cover.

Another problem we encountered in making Color Him In was that Curt Boettcher was trying to finish up an album with The Association at the same time. The Association wanted to produce themselves and argued with Boettcher all the time about who had the final say. So as you can imagine we were never just concentrating on one thing. We were always arranging time to suit numerous demands made by several different entities. This tended to make Curt crazy and unable to do what he wanted on some of our work.

Staying for a moment with problems involved in the making of this record, we found ourselves constantly up against the money clock. We always had a limited amount of time to do everything. Steve would tell us, "OK you've got 3 hours of studio time on Thursday to get something started or finished." No one ever really knew when these times were going to be available until the last minute. Because of this we were always under stress when most of the work was done. Musicians, like Jerry Scheff, would go from a Tommy Roe session to a "Color Him In" session back to back... Got pretty damn confusing.

Curt was surrounded by people who all became friends of mine, like Michele O'Malley, Jim Bell, and Lee Mallory. Fans of Curt Boettcher will readily know these names from other Boettcher works like The Ballroom and The Millenium. At one point I moved into a house with all of these people and we tried living together but it proved too difficult in the long run. Too many dominant personalities in one place. Working together was one thing, living together was another.

Curt and I were very close friends while we worked on "Color Him In." We were never anymore or less than friends. Those of you who are familiar with Curt's personal life can put your questions away. Curt and I were good friends. We liked working together and we inspired each other. We created a record in the 60's called "Color Him In." I have much more to say about the making of this record and the people who made it possible, but for now I have set up a pretty fair groundwork for the continuation of that story.

Before I go on with the making of "Color Him In" I want to tie up some loose ends regarding the other things that were occurring at the same time, like "The Monkees" audition. I had to meet with Phil Turetsky and tell him of my decision to go with Steve Clark and Curt Boettcher rather than become a "Monkee." Phil, who was extremely easy going as I have already stated, took it all in stride and said he figured that would be my decision. He was not surprised.

He told me that either choice would have been the right one. He said it was important that I felt comfortable with my choice rather than do what others thought I should do and be miserable. I thanked Phil for his help at getting me pointed in the right direction, and told him that without it I would have just continued doing the same thing over and over without ever getting anywhere. He assured me it had been his pleasure and hinted that he wanted to keep being involved with me if that was OK. He said he'd make sure that Columbia was notified about my decision to turn down "The Monkees" television show.