(part 27) LOOKING BACK AND MOVING FORWARD 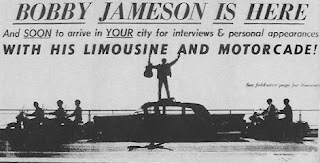 So there I was. After 3 records, with 3 different labels, in 2 different countries, I hadn't made 10 cents. The only one of the records that had really done well was "I'm So Lonely" which I wrote, arranged, sang, and produced. Somehow at 19 years old and turning 20 I was blamed for each and every failure that occurred. Tony Alamo, Andrew Loog Oldham, Brit Records, Lee Karsian, and his rich British friends who'd walked out, were all blameless according to them.

Still in a foreign country without so much as lunch money, I was concerned with my tenuous circumstance. I analyzed the closing chapter of my English experience and my overall career to date. Whatever the final outcome was to be, I felt, and still do, I deserved more credit for persevering than I have ever received.

I learned it's easy to blame the artist for failures rather than admit to any yourself. It was management, producers, and record labels who were responsible for many of the failures, but it is Bobby Jameson that they blamed. Be that as it may. I was headed back to the USA with only a tarnished reputation to show for the prior, nearly year and a half, of the Bobby Jameson story.

I would ask that the reader be somewhat patient with me, as I am experiencing dreadful headaches, and find it somewhat difficult to remember and write clearly my experiences. I have tried to highlight specific parts while acknowledging that many details have been omitted from these writings, though nothing of a pertinent nature has been left out. Admittedly I could have done many things better, looking back, but I and the reader have to keep in mind that I was only 19 years old and completely inexperienced.

I had no lawyer, no manager, and obviously no friends by the time I left England. I did the best I could at the time of these events.

Here are the facts...

Bobby Jameson and Tony Alamo. No contract of any kind. That includes publishing. I never signed away the rights to any of my songs to Tony Alamo or anyone else who may be claiming to own my songs or any one of the songs that I recorded while with Tony Alamo and Talamo Records. That would include Kim Fowley Music, who claims to own "I Wanna Love You" which he does not. I reject his claim outright.

Bobby Jameson, Andrew Loog Oldham, and Decca Records, no contract. I have never been paid one penny for the record I made with Andrew Oldham, Mick Jagger, and Decca Records. I never signed a contract with anyone at any time regarding the record "All I want Is My Baby/Each And Every Day." That record has been released numerous times as a single and as an addition to numerous albums world wide in 44 years.

Bobby Jameson and Brit Records. Probably some sort of an agreement made with a 19 year old kid under duress, on foreign soil, with no legal representation at the time of the signing. Questionable at best. I have never received any compensation from any source at any time for this record and song other than my rent was paid and I was fed while working for Brit Records. Again, Kim Fowley Music claims ownership of the song "Rum Pum Mum Num." I reject his claim outright and claim all rights to my song and performance.

As I relive these facts from my past, and attempt to clearly detail those events here, I am forced to examine how it is that not one penny in royalties for writing/publishing/and or performances has ever been paid to me, or seems to be of any consequence to those who shared in the responsibility of the events that occurred. I have never made a penny from any of these recordings or songs, or spoken to, or been contacted by any of those involved.
Posted by Bobby Jameson at 6:31 PM No comments: