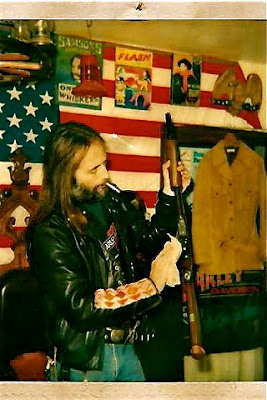 Me in the store

By 1987 I had saved about $5,000 to go back to L.A. This was accomplished by filing for unemployment, as a result of having worked for Pacific Freight in Southern CA. a couple of years earlier, selling tools on the telephone. I filed for it in 85 and saved most of it. I then had a decision to make that would alter the direction of my life again.

I recall being in Santa Maria with my brother Bill, another small town about forty miles south of where we lived. I had taken him with me to the Harley Davidson dealership to look at a Sportster. I told Bill that I had enough money to buy the bike or go back to L.A. for another shot at the music business.

"Whatta ya think?" I asked.

I stared at him and then laughed. "Yeah, I know what you mean," I replied, "I think you're right!"

The outcome was that I bought the bike and stayed in the Five Cities area of Central CA. It was a decision that once again changed things. I was clean and sober, and though I had encountered many obstacles and difficulties in Grover City, CA., I had been free from the meat-grinder of the music business. I knew that if I went back to L.A. it was going to be more of the same, or at least that is what I believed, so I opted to pass on it.

In 1987 my mother owned and ran an antique store, something she'd done a lot of in her life. It was called "The Browse Around," and was located in Grover City on the main drag. It sold a lot of different kinds of things, such as jewelry, art, knick-knacks and collectibles of various kinds, and antiques. I started finding things to put into the store to sell and worked there as a salesman.

Eventually I took over the entire business when my mother decided to take a break from it. Rather than just closing it down altogether I told her I'd run it and pay her for things she left in it when they sold. She was happy to do it, because it meant she didn't have to pack it all up and put it in storage. The store quickly took on a new personality, and was frowned on by local law enforcement, but in reality The Browse Around became an immediate hit in the area because a lot of the locals liked the way I ran the place. 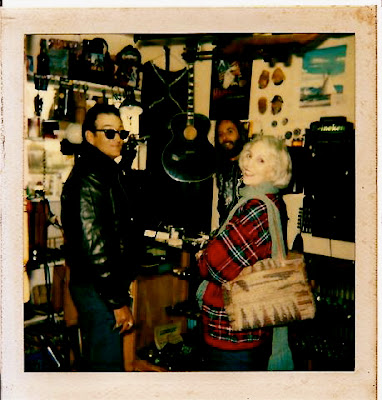 My brother Bill, me in the back, and my mother in the store

I began selling things like electronics, tools, motorcycle leathers, knives, and continued with the jewelry, antiques, collectibles, and art. Eventually I started selling firearms, and became a Federally licensed gun dealer, much to the dismay of the various police departments in the area. To some extent it was me pushing back against a community that had gone out of its way to rid itself of my presence, but at the same time it was me searching for a new identity.

I had always known, at least in my own mind, who I was, or who I thought I was, but my move to the Central Coast of California had left me in a quandary about that subject, so I kept trying to re-identify myself in some new capacity. Harley Davidson motorcycles, guns, and knives were part of that search to find a new version of myself, one that I could commit to. The Browse Around, and it's distinctive personality and merchandise became, for me, the way I chose to interpret myself at the time.

In part, it was that I'd been condemned as an outlaw before I really was one, so my response was to become the outlaw I'd been portrayed as, with an in-your-face decision to accept the judgement and wear it with pride. Not only did I consciously choose this route, I made the decision to shove it down the throat of any and all who objected to it, which initially was the city council, the police, and various citizens.

I am not trying to convince you that what I did was a good thing or a bad thing. It is just what I did with my life at the time. I can always look back at my decisions and question them, and I do, but I cannot change them. The best I can hope for is to attempt to explain them and report what happened in the past.
Posted by Bobby Jameson at 4:35 PM 2 comments: