(part 114) THE ROUND TABLE AND THE LITTLE GRAY MAN 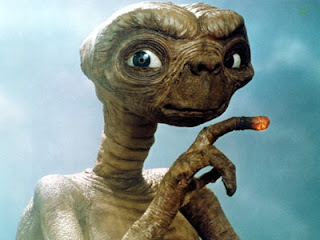 I found myself seated at a round table. There were numerous other people seated there as well. They were dressed in white robes, and all of them had long hair and beards. They were all men, there were no women.

I could see nothing beyond the area of the table. I was asked questions about my intentions, and what I had been trying to do by killing myself.

Instantly I was shifted from where I had been into the presence of what I have learned to refer to as "the little gray man." He was about 3 feet tall and did not speak, but communicated with me directly, as in mental telepathy. His skin was gray, his hair was gray, and his clothes were gray and tattered looking. He looked kind of like E.T., except this was ten years before that movie was made.

His attitude toward me was almost matter of fact. He seemed a bit irritated that he had to be there dealing with me because I had committed suicide. His position clearly was there was no such thing as death, so my actions in killing myself were absurd, because I couldn't die anyway.

According to him I would just be in some sort of holding pattern until I was willing to confront whatever it was I killed myself over. He then telepathically asked for my response, which was, if that were the case I was ready to go back and deal with the problems I'd committed suicide over.

Immediately we were transferred into what I will describe as a tunnel-like place. It was well lit, but there were no lights. The walls looked exactly like beige stucco, and were curved into the ceiling. It was not a small place, nor was it extremely large, and it ran as far as I could see in either direction.

The floor was like translucent marble and light emanated up through it in a steady pleasant glow. Not bright light, just enough to see clearly by. As I surveyed the surroundings we started moving forward and going deeper into the tunnel. We were not walking or riding on anything, and the floor was not moving like a conveyor belt, we were just in motion.

We started quite slowly but picked up speed as we continued moving forward through the tunnel. I noticed other tunnels on either side branching off in other directions.

I watched the other tunnels go by for a bit, and looked to "the little gray man" for some sort of explanation as to their existence or importance to our voyage. What he did, knowing I was asking a question of him, was to overtly and emphatically turn his head one way and then the other indicating, "No," as his response.

As we continued on, I began seeing incredibly colored glass balls that just seemed to hang in the air unsupported by anything. They were the most brilliant colors I had ever seen. Not bright, but brilliant. An emerald green, ruby red, sapphire blue, and yellow that were otherwise inexplicable. These globes were mostly the size of a basket ball and appeared periodically as we kept moving.

We were now traveling at an unbelievable rate of speed through the tunnel. I felt calm and assured. There was no sense of fear or anything negative. I was completely comfortable and relaxed.

The speed continued to increase, and I could not make out anything, except "the little gray man" standing beside me. I looked forward again just in time to see us penetrate what seemed like a wall or veil.

I sat bolt upright in bed at UCLA's intensive care unit. All kinds of beepers and buzzers went off, and I had no idea where I was. I could barely see, but managed to make out the misty figure of what turned out to be my mother, whose face had a look of shock cut into it.

I started crying and blurted out from a place of deep sadness, "I'm an eagle, and they want me to be a sparrow; eagles can't be sparrows." I was crying because I was still alive.

The pain of coming back into consciousness on the planet I had left was the most excruciating pain I had ever felt in my life. It was like hitting a brick wall at two hundred miles an hour. I cried myself back into life, my God-awful life.
Posted by Bobby Jameson at 8:48 PM 3 comments: