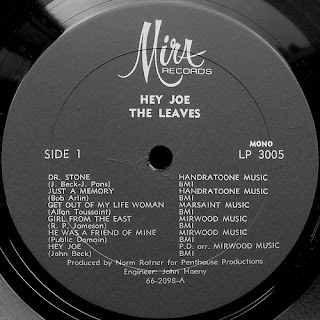 click
The Leaves album with my song GIRL FROM THE EAST

Because there was no contract for Chris Lucey, Mira/Surrey was left in much the same situation they'd been in with Chris Ducey's contract problems. The difference was that I, unlike Ducey, had no legal or any other representation at the time.

Randy Wood was not about to hold up the album's release and stop Surrey's move into Europe again. He and his partner, Betty Chiapetta, along with Abe Somer, decided to go ahead with the scheduled release, based on their assumption that no one would question me or Mira/Surrey about contracts back then. That of course proved to be accurate at the time and true as well for ensuing decades.

Had Mira/Surrey offered me a contract with even the slightest of benefits given to me I probably would have signed it, but in Randy Wood's mind I was due nothing. I was simply expected to roll over when asked. But I'd already played that part with Tony Alamo, Andrew Oldham, and Brit. I was unwilling to go along with Wood's and Somer's demands after completing Chris Lucey. In my mind I had saved their ass and believed they owed me much more consideration than they were offering.

Mira/Surrey was focused on their deal in Europe not on whether Bobby Jameson was treated fairly. With or without a contract they moved ahead, dismissing any problems with me as details that could be sorted out later. It was not as if anyone expected the Chris Lucey album on it's own to be a hit. It was just one of the cogs in a larger wheel.

Randy Wood was such an ego maniac that he in essence dismissed me and my rights as irrelevant to his forward motion. The fact there were never any legal agreements between me and Mira/Surrey for the Chris Lucey project was literally buried in a box that had "Who Cares!" stamped on it. Business was business in Randy's mind and no little piss-ant like Bobby Jameson was going to get in his way.

The history of Randy Wood had already been written by the time I worked for him. Long before there was any Mira/Surrey, Wood's reputation as President of Vee Jay Records had been well established along with his partner Betty Chiapetta. The addition of Abe Somer was just another black mark against the likes of Mira/Surrey's reputation of questionable ethics and business practices.

In the picture above you can see my song Girl From The East, from the Chris Lucey album, on the Mira release of The Leaves record which followed Chris Lucey. It says that Girl From The East was published by Mirwood Music another of the many companies belonging to Randy Wood and Betty Chiapetta. The songs from Chris Lucey have been moved and moved again for decades, creating an endless trail of "hide the pea."

I have never been paid a penny for Girl From The East no matter which version or record we are speaking of. Nothing! Ever!