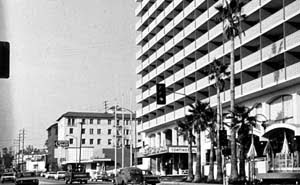 I remember the sun shining through the window of the apartment as I picked up the telephone to make a call. I managed to get someone from NBC, or CBS, news on the line, and told them who I was.

It was odd, because they knew exactly who I was from the Pacific Theater Tower incident, and Continental Hotel coverage. They seemed surprised that I called them, and asked why?

"I thought I'd call and let you know I was going up again," I said. There was a noticeable pause. "Whatta you mean you're going up again?" the voice asked.

I hung up the phone and walked to the door. I'd calculated the amount of time it would take me to get to the Continental, so I moved quickly.

Heading for the hotel, I wondered if whoever I'd talked to would call the police and tell them what I'd said. "Shit," I thought, "they want the story more they they want to save my ass, or get me arrested; they won't call, they'll wait awhile before they do that."

I don't remember if I drove, walked, or took a cab, but I do remember getting there and looking for sheriff's cars and not seeing any. I just walked in the front door, as I had before, and got on the elevator. "It's odd doing this again," I thought,"very odd indeed."

I hit the button for the roof and pool area, and the elevator started its journey upward. I stared at the floor, thinking, "This is some crazy shit, man, this is some crazy-ass shit you're doing." "Fuck em!" I said out loud, "Fuck em all!"

The doors to the elevator slid open, and I paused, waiting to see if anyone was there before I got off. Nothing. The coast was clear.

I halfway expected the police, or security, to be waiting for me when I came out of the elevator, but no one was there. I went to the top of the hotel this time, not the floor below, like before. Instead of the back of the building, I was on the front side, overlooking Sunset Blvd.

From where I stood I could look straight down on the the driveway and entrance below, and see what was going on. In a while I noticed a flurry of cars and other vehicles begin to congregate below. I kept watching them, and soon the sheriff's black and whites began showing up.

As the adrenaline began surging through me, I moved to the outer edge of the roof, knowing no one would come out there and risk their life to get me. I was not suicidal or depressed. I had no vision of ending it all, or thinking I would be helped. I was there purely to fuck with the entire world at that point.

I had been stripped of any belief that I had the power to fix my situation. To the contrary, I knew I couldn't. This action was based on my absolute feeling of powerlessness. This was the only thing I knew for sure I could control, at least in the sense that I could cause the world around me to respond. Everyone I'd asked to help me had refused, so this act of defiance was a response to them.

Rightly or wrongly this decision, in my mind, was a way of taking control of something, of anything. When a human being is left with the belief that their life cannot be controlled by them in a positive way, then that human being will seek and devise other means of action to create a sense of power in their own existence, no matter how wrong that means may be.

This was Bobby Jameson's dilemma and choice on this particular day. I was well-known at that point for doing what I was doing. I just chose to do it again because I knew how. I couldn't resolve my problems in a constructive way, so I chose to assert myself negatively.

I am not saying, even minimally, that this was a worthy choice whatsoever. I am explaining, as best I can, the dynamics of both the predicament I faced, as a cause, and the choice I made of how to deal with it.

Powerlessness, at a certain point, can be lethal when a person feels hopeless enough, so in defense of myself, this act was more positive than the alternative, suicide. I eliminated the alternative of suicide by creating a false alternative to focus on, the building.

I turned, just as a number of bodies appeared on the roof. Standing on the very edge, I greeted them, "How's it going gentleman?" I asked sarcastically. They stared at me like I was the craziest bastard they'd ever seen.

There we were. Me on the very edge of the building, and them staring at me looking completely baffled as to what to do with the situation.

I, in my own weird way, smiled at them, knowing I was in full control. That moment was frozen in time, and only came to life again, when the sound of the first helicopter shattered the mesmerizing silence.
Posted by Bobby Jameson at 8:38 PM 3 comments: