Making the album "Working" was somewhat of an act of capitulation for me, following the trouble I'd had with Verve over writing songs that many deemed questionable. At the same time, I was extremely focused on trying to create a work of some merit.

I chose, and was forced in part by circumstances, to write less objectionable material for the album. By limiting the number of my songs, and using other people's material, I found a way to make the album and sidestep the fight over what I could write for it. It was a new process for me. The only other time I'd done it was in England, when I recorded "All I Want Is My Baby/Each And Every Day" in 1964.

I wanted to record an album, so I created a way to do it, by agreeing to a different direction with "Working." Had I been given the freedom to record what I wanted, following "Color Him In" and prior to "Working," there would be an entirely different record than the one I've been discussing here.

So when I say it was somewhat of an act of capitulation, I mean it. There weren't a lot of opportunities available for me at the time, so I had to choose between standing my ground, or compromising on the type of music I recorded. Making demos was one thing, recording an album that would get released by a label, was another.

In the back of my mind, all the way through the "Working" sessions, was a building resentment over the lack of freedom I had in choosing the kind of album I wanted to make. Although I gave it my all, I knew in my heart that there was another record that should have been being made.

In 1968, following the difficulties of having been on trial for a year, I was aware that a position of strength was not where I was standing. It was to some degree, "take it or leave it" territory, and I tried to make the best of it. Bob Ross, a rather conservative man, was footing the bill, so he was the one dictating on the subject of content.

I do not begrudge him his position at the time. It was his sincere belief that I was capable of writing the right kind of material, and making a good record that both he and I would be proud of. Because of his sincerity, I was able to invest myself in the project as much as I did.

The various difficulties in the way I ended up recording the album were taken in stride by everyone who worked on it, as a necessary decision to insure that the tempos and meter were true to the way I interpreted the songs.

The live performance quality of the album was the one thing I refused to budge on. This of course could have been overcome, if I and the musicians had had endless time to get it right, which we did not. I knew that if I recorded it in the traditional way, the album was not going to portray, in the slightest way, how I played and sang these particular songs.

It is in fact, the essence of what made "Working" different, as well as valid, which over time it has proven to be. The Band, whose song "The Weight" I recorded on the album, has given "Working" a page of it's own on their website out of respect for my version of their work. There is a link "Bobby Jameson Working" at the top of the blog page where you can click to that site.
Posted by Bobby Jameson at 7:17 PM 2 comments: 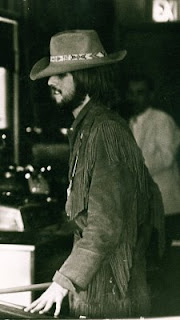