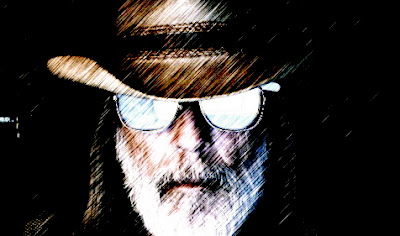 There are those who will wonder why I give attention to people like Tom Weatherwood. It is simply this. People like Tom live in a world where they have learned to justify their version of acceptability through a twisted belief in Christian Fundamentalism, something this entire country is beginning to be forced into coping with. Tom lives no more than a few miles from me, and is a carbon copy of the kind of crap-head I have had to deal with since the first day I arrived in San Luis Obispo County in 1985.

This is not about me whining or my music being good or bad, this is about people like Tom, who think they are called by God to clean house. The United States Of America is faced with exactly the same twisted mentality exhibited by this moron in his email to me from out of the blue. It occurred to me that the depth of his distaste is centered on the fact that, in his mind, I am plainly not the kind of person he wants in his area, particularly if you draw public attention the way I do.

I can accept that I am not Jesus Christ or Bob Dylan, but it is telling that he refers to me in that way. His belief about what he thinks I think about myself reeks of something conjured up by so-called church elders from hell. His self-serving "holier than thou" take on me is his own creation adopted after, in his own words, a year of thinking, reading, listening, and discussing me with others. Why anyone would bother to invest so much time in someone they despise is mental illness at it's finest.

Tom is a successful central coast resident, and he exemplifies, unfortunately, what this area is like. He is part of the local "good ol boy" establishment and resents, in the deepest way possible, the presence of one Bobby Jameson, or anyone like me, scumming up his picture perfect God-like vision of San luis Obispo County, a place, which at times, acts like the deep south in the 50's and 60's. This area is crawling with Christian fundamentalists, pawning themselves off as solid citizens determined to cleanse and clarify life on the central coast and the "Garden Of Eden."

Tom Leatherwood and all those like him are on a crusade to determine what's right for everyone. They are the Rick Perry, Sarah Palin, Glen Beck pricks of the central coast. They are self-ordained assholes with a Bible in one hand and a gun in the other. They are called by their so-called ministries to do God's work wherever and whenever they decide it is appropriate. It would appear that currently I am on their hit list, but this is not the first time for me.

You, the reader, can decide for yourself whether what I say here is real or fanciful thinking, but I in my fortress of bad behavior and endless complaining already know the answer...which is, "I will fight you till the day I die!"

I have loosened up comments so more can get their opinion in....even if it is to say how much you hate me and my pathetic mega whining.....