(part 30) THE WOMEN AND THE STREETS OF HOLLYWOOD 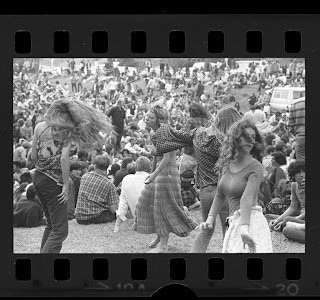 I still remember that moment like it was yesterday. Staring at my suit case and guitar case, wishing I didn't have to lug them around, but having no place to leave them. So there we were, me and the 2 cases. I stared at the blacktop, covering Ben Franks parking lot, thinking about how warm it was compared to London. I was over dressed for Southern California, but couldn't do anything about that either.

If I took off my suit coat, I still had to carry it, or keep and eye on it, so it just seemed easier to leave it on. For the last year and a half I had stood on stages in front of thousands of people, been on television in two different countries, hobnobbed with the rich and famous, been written about, photographed, and recorded. Now, I was just alone, standing in a parking lot with nowhere to go.

It was a moment that froze in time, when you realize clearly, that there are, and will be, no guarantees about anything. I was yanked out of my dreamworld, literally, by the sound of a girl's voice asking, "Bobby?" I turned in the direction of her voice and tried to figure out who it was. To this day I cannot remember her name. I am sorry, she may have saved my life, at the least, she certainly made it easier.

I didn't recognize her, but she knew me. "Yeah," I said, "it's me." "Wow you look great," she announced. "Like one of the damn Beatles," she said. "Thanks, I just got back from London." I replied. "What were you doing there?" she asked. "Making records with Mick Jagger." I said. She stared at me like I was from mars, trying to incorporate what I had just dropped into the conversation. "Really," she responded, not too sure I was telling the truth, "What was that like?"

"It was OK I guess, but it didn't really work out too well." She had no idea of what I was talking about. "So what are you doing here in the parking lot? Why didn't you go inside?" She asked. "I just got here, just a little while ago." I said, "I was trying to figure out what to do." "Well where are you staying, are you here in town?" she asked. "I don't know." I said. "I don't have any place to stay." She looked straight at me and said, "My girlfriend and I have an apartment just a couple of blocks from here, you can stay on our couch if you want?" I still remember the relief I felt when she said that, like a boulder had been lifted off me. One problem solved! "Yeah, I answered, that would be great if, are you sure it's ok?" "Sure it's ok, my room mate will love you."

This moment in my life proved to be the beginning of how I would live in Hollywood and the surrounding area for the next 20 years. It was the women of Southern California that saved my ass, literally, over and over again. I lived with them, I loved them, I fought with them, I got loaded with them, and every other "with them" you can think of. If it were not for them, I would be dead, period.

I bonded with so many different women in those 20 years, that it would be close to impossible to recall or remember each one of them. But as far as I can tell, not one of them ever hated me and there are none that I ever remember hating. To the contrary. I am still coming across many of them, because I am writing this, and because of the internet in general. Some of them, from 30 and 40 years ago. They tell me stories, send pictures they still have, and all kinds of wonderful things. For this, I am extremely grateful and happy. I'm sure the possibility still looms large, that I have yet to encounter some, who may not hold me in high regard. This too, I will accept willingly.

After settling in on the couch for a day and having a place to stash my stuff, I hit the streets. I had to get out and get something going. I was used to having a plan and then acting on it. If no one was looking for me, then I'd go look for them. If no one knew who I was, and they didn't, then I'd tell them. It was like what I used to do, before Tony Alamo found me. Just get out and circulate, like me and Danny Whitten, Billy Talbot and Ralph Molina used to do. Find out where the action was and go there and stay there.
Posted by Bobby Jameson at 4:01 PM