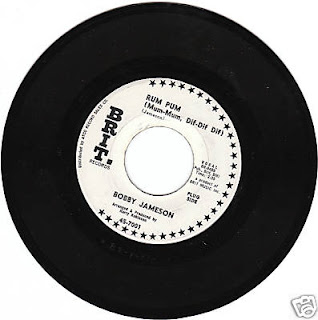 It was a big deal to both Brit Records and the TV show's producers. I'd crossed some line that you don't cross according to all of them, and they were not going to stand for it. They demanded an apology from me and went on and on about how much they'd done for me, and how insensitive I was and this and that and... That was it! I kind of lost it at that point, because all I'd heard for over a year was how much other people had done for me, as if I hadn't done a goddamn thing.

I told Chris Peers, who was the big cheese ball at Brit, that someone should have told me about what they were planning to do on the TV show before I got there, so I might have had an idea of what to expect before they dropped it on me at the last minute. "I thought it was a bullshit idea Chris," I said, "but nobody asked me. You guy's all expect me to do what ever you say and that's it. Well I guess you know now that's not just it."

I laid into him pretty good at that point and aired some of the feelings that had been building up for a long time. "When I was in America," I said, "I was singing live on stage in front of thousands of people. Ever since I came to England all I do is go in the studio and then on TV. I told you guys that "Rum Pum" was not the right song, but you wouldn't listen so I did it your way." "Look Bobby," said Chris, "We told you in the beginning that we at Brit thought it was the best way to to things. To gain a commercial success with a song like "Rum Pum," and then you'd be able to do the kinds of songs that you wanted to do."

"Well it's not working out Chris," I said, "You've got another TV record just like before. Why don't you give me a band and let me put together a live show?" "Now Bobby, we've been through all this before, and everyone agreed that the way we're doing it is the proper way to present you to the British audience."

I interrupted him and said, "Chris, I frankly don't want to do it your way anymore, or Andrew Oldham's way. All I know is that I'm the one going on television not you, and that both of those times have made me look and feel like a fool. I never had that happen until I came to England and let other people tell me what and how to perform. It's just something I always knew how to do. But for some reason no one in this Goddamn country will let me do it."

At that point, some of the other people in the room said it was time to end the meeting and let everyone have time to reflect in a calmer fashion. So there I was, alone again. Bobby Jameson, boy wonder, pissing off the hand that fed me. I felt like shit and had no idea of what to expect or what I should do. I knew I didn't want to keep parading around like a "teen dolly" for the likes of Chris Peers and Brit Records and do more absurd TV performances. So what then? What should I do?

I remembered what PJ Proby had told me when he was in a similar jam over splitting his pants and being threatened by the British Home Office with deportation for lewd public acts, as they called it. "Bobby," said PJ, "You'll know when it's time to leave England. It'll just be obvious to you when it's there." That was the last time I ever spoke to Proby, but now here I was, asking myself if that's where I'd gotten to. "Was it time? Was this it?" I had that feeling like, "Yeah, fuck it! It's time to go home."

My life had been like a buzz saw for over a year now. I was a completely different person than the one who'd been discovered in Hollywood, at the "Carolina Pines" by Tony Alamo. I'd seen and done things in the past year and I don't know how many months, that a lot of people will never even know about let alone experience. I felt lost and lonesome for the States. I just wanted to get out of England and go back to America, so that's what I set out to do. No matter what anyone said, and they had some things to say, I was going home.

Brit refused to help me in any way and that was that. They turned their back on me and I understood why. I had no money and no friends. There wasn't one person in that whole country I could ask for help. The only way I ever got help was to put myself up for sale, as I have already written about in a previous post. I had no way to buy a plane ticket out of the country. Brit would only assist me if I continued to do what they wanted, and that was out. So what was I supposed to do with this new pile of shit I was living in?

I didn't know then, and I don't remember now, but somehow I ended up at the American Counsil or something. You know, like a diplomatic US building in a foreign country, that's where I went. I told them who I was, where I was from, and how I got into England in the first place. I told them I'd been brought to England by a bunch of people, both American and British, as an American pop star to work with Andrew Oldham and make records. I said that things hadn't gone too well and now I wanted to go back to America, but none of the people who brought me here had made any arrangements to get me back. "They all abandoned me," I said.

The guy looked at me like I was from Venus. He got so mad I thought he was going to have a stroke right then and there. "What do you mean they abandoned you?" he asked. "I mean they just left me here about 5 months ago and went back to America and I haven't heard from them since," I said. This guy got even more pissed off after I said that. "We'll bloody well see about that," he said. He told me to go back to my flat. He asked if I could do that and I said I could. He told me he'd contact me as soon as possible with news on what we'd do about my situation. He verified my passport and wrote down a lot of information and then politely sent me on my way.

In a couple of days or so, not very long, he contacted me and said there was a one way ticket in my name to New York City, and then on to Los Angeles. He asked if that would be convenient for me? I told him "Yes!" but was a little startled that it happened so fast. I asked him to tell me who paid for the ticket, but all I could get was that it was paid for by the same people who had arranged to get me to England in the first place. It was clear, I thought, that they had not been given a choice in the matter. Something about International Law and responsibility regarding citizens on foreign soil and such. I figured they'd threatened Lee Karsian and his rich English friends into getting my ass back to the US. I, to this day, do not know what actually happened.
Posted by Bobby Jameson at 10:16 PM