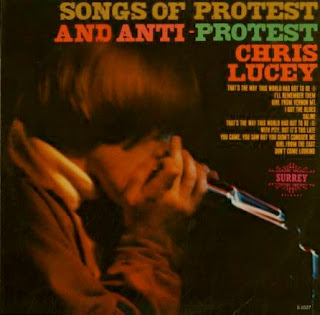 The Chris Lucey album is what it is. The people who worked on it worked hard as I recall. Everybody got wrapped up in this odd little record and gave it their all. It was a strange time in 1965, and Songs Of Protest And Anti Protest seemed to capture that in some a way.

As I said before, music and the music business were in a state of massive change and not everyone was sure about what that meant. Even Marshall Leib finally admitted that the record had it's own unusual charm and said it came out better than he'd expected. Randy Wood was a happy man and made no attempt at downplaying his enthusiasm.

Pam Burns was hailed as a genius by Randy Wood and there was a sense of relief at Mira/Surrey over the completion of the project that had had them so hung up. I was getting a lot of pats on the back for coming through under pressure, and Marshall Lieb and Randy seemed to have squared their differences, what ever they had been, with the completion of the Chris Lucey album.

I never saw Marshall much after that, and have always wondered what happened to him. Pam reminded Randy that he'd said that if I got the Chris Lucey record done on time, and Randy approved of it, he'd let me make a record of anything I wanted and release it on Mira Records as a single under my own name.

Randy said, "Damn! You ought to be this guy's manager." "Just making sure you remembered what you promised," said Pam. She was always looking out for me. From the moment I met her she was always on my side. I have the fondest memories of her. She was a true friend, probably better than I deserved.

There were still things to be done to the album. A couple of overdubs, like the harmonica part I played on "That's The Way The World Has Got To Be," the final mix, and then mastering. But for all intents and purposes the album was done and I was glad. It was hard writing songs to someone else's titles and I swore I'd never do it again.

I was now Chris Lucey in an odd sort of a way, even though Chris Lucey didn't really exist. He was a figment of the the printing press and imagination of some weird destiny. No one, with the exception of those at Mira Records and the musicians, knew who Chris Lucey was or cared. The public certainly didn't know I was him nor did anyone else for years to come.

Chris Lucey was released in other parts of the world as "Too Many Mornings" by Bobby Jameson sometime after it was released as Chris Lucey "Songs Of Protest And Anti Protest" in 1965. Although both albums are identical, they were seen as separate from each other until many years later. The album was also released on Crestview Records in the 70's, another Randy Wood label, and in a box set of Vee Jay masters as well.

It wasn't until 2003 that I even knew anyone cared about the album or knew that Bobby Jameson and Chris Lucey are the same person. I spent over 40 years trying to forget that I ever made the album, because so many people had put it down as a worthless piece of junk.

At some point after most of the work on Chris Lucey was drawing to a close, Randy and Abe Somer got me alone in Randy's office one evening. They said they wanted to talk to me about my plans for the future or something to that effect. After going in to his office Randy closed the door, which he almost never did, and started smiling at me and telling me what a good writer and singer I was.

I eye-balled Abe Somer who was standing there with a thick stack of papers in his hand grinning like a cheshire cat. I immediately felt uncomfortable, because this scenario was completely out of the ordinary. I was used to being treated like the odd man out most of the time so I sensed that something was up. Randy went on and on about how surprised he was with my ability and that because of it he was prepared to offer me a contract as an artist and writer.

I asked him if that included Chris Lucey? He said it did. I asked him about what the contract said and how long it was for. He told me seven years and that he would be willing to publish all and anything I wrote from then on. There was no talk of anything for me, just what he and Mira would get if I signed. The feeling in that room was like a kid being ganged up on by two bigger kids.

I told Randy that this was totally unexpected, and that I didn't know if I wanted to be tied up with somebody for seven years. Randy's expression changed immediately from that point on. "Whatta ya mean for that long? That's standard," he said, "for an artist's contract." "It might be Randy," I said, "but I don't know if that's what I want to do or not. I'd have to think about it for a while."

"Think about it," he yelled, "I just gave you a chance to cut a whole goddamn album you ungrateful little prick. What's there to think about?" I stood there looking back and forth between Abe and Randy, trying to gather my wits, as the whole meeting seemed to go out of control. "Did Abe write the contract?" I asked, "You know he did. What's that got to do with it?" yelled Randy. "That's why I'm not going to sign it," I said, remembering what I'd learned from Randy about Abe Somer contracts.

Randy moved in on me like a street fighter and grabbed the collar of my shirt with both hands and threw me up against the office wall with a thud. "Listen you little son of a bitch, I..." He trailed off realizing what he had just done. I stood there motionless until he released me from his grip. I looked over at Abe who had not moved one inch since the whole thing began. Not because he was afraid, but because he was a steely little prick who was unaffected by Wood's occasional outbursts.

Randy kind of mellowed as fast as he went off. He was like that. He'd change back and forth in a matter of minutes. "Go ahead, get outta here," he said. I pulled myself off the wall and headed for the door not saying a word. I remember thinking, "No one will ever do that to me again. No one! Ever!"

I never signed a contract with Mira/Surrey for writing the songs for "Songs Of Protest And Anti Protest" or performing as the artist Chris Lucey. To this day that remains the case. No one owns the rights to those songs except me. I never gave them away knowingly or unknowingly. I created them, and until someone can come up with a contract with my signature on it, stating a legal difference, I own the rights to my songs and performance on the Chris Lucey album.
Posted by Bobby Jameson at 9:33 PM