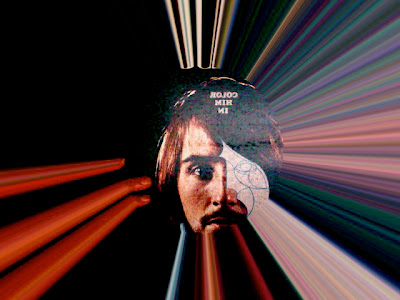 I had very good luck with LSD until I ran into some of the very first Owsley Acid to hit Southern California. I knew a film director named Henry Jaglom, and he'd gotten a batch of this from San Francisco. He'd been warned about the stuff, and told that it was not your run of the mill street shit that had been floating around L.A. for the last couple of years.

Henry was a bit worried about the warning so he contacted me and said he'd gotten some high quality LSD from San Francisco, but didn't know how strong it was, and if I was willing to test it for him he'd lay it on me for free. Like an asshole I agreed, figuring, "How bad could it be? I've taken a lot of acid and never had a problem."

I met with Henry and he gave me a big fat gelatin capsule of this stuff. Without so much as batting an eyelash I dropped it in my mouth and smiled. I told him I'd get back to him the next day and tell him how good or bad I thought it was. I then drove to Bel Air and went to Jerry Doff's house. He was a lawyer I'd gotten to know, and where I occasionally stayed.

It was a huge mansion inside the gates of Bel Air and I settled into a small bedroom off the kitchen, which was used as a utility room and playroom for Doff''s kids. I didn't think anything about the fact that I'd just taken this stuff without any information about it, and was curious as to what kind of trip it would be.

I was lying on the bed and started noticing crayola marks the kids had made on the wall. I stared at one of these marks for awhile and it started to multiply. I looked away thinking I was just getting blurry eyed, and then looked back at the dot like mark.

Again, the marks started multiplying. They began flying off the wall into the room around me filling the air with thousands of flying dots. Pretty soon the whole damn room was filled with literally tens of thousands of furiously little spinning dots that seemed to attack me.

I became lost in my war with the dots, when all of a sudden I realized it was the acid kicking in and I was hallucinating. I got off the bed and stood up trying to clear my mind and gather my senses. I was beginning a trip that I knew nothing about and was entering a zone I had never known. I was totally unprepared to deal with what was coming.

As I stood in the middle of the room, all the depth perception of everything ran together as if that room, and everything in it, had become liquid as opposed to solid. It is difficult to find the right words to explain the enormity of the hallucinations I began to experience.

I had hallucinated before, but this was completely different. This had an edge to it that dwarfed any previous experience I'd had, and caused me to go in and out of deep psychosis. I completely lost sight of myself from within myself. I was a spectator of someone who was me. This will take no more than minutes to explain, but it took hours to occur, so keep that in mind as I describe to you part of what happened.

I managed to leave the room, because the smallness of it was unbearable. It felt, and appeared, that the walls, ceiling, and floor were all moving in towards each other, and that I would be crushed within them when they met. I stood out in the hall. It looked like it went on forever. As I stared down it's endless length I had no idea of where I was, or for that matter, who I was.

I was just a thing, thinking things, that had no connection to anything. When I was sure I was lost I would suddenly reappear to myself, realizing how powerful the drug I was on was. I had no capacity to control, in the slightest way, what was happening to me. I understand that using LSD is a form of giving up control, and just tripping out, but this was completely terrifying.

It was like losing your mind and being a witness to the fact that you were losing your mind. I finally made my way to Jerry's bedroom, which was massive, and tried to speak to him. He looked up at me and said, "Oh hi Bobby, how's it going?" I stared at him and tried to talk but no words came out. I couldn't make my mind formulate thoughts and turn them into words.

Jerry realized something was wrong and said, "What's the matter Bobby? Is something wrong?" I looked down at a coffee table on the floor and watched it start to disappear. It began at both ends simultaneously, disappearing as it moved to the middle and was gone. It just went away. Then all of a sudden it reappeared by the same procedure in reverse.

I was completely mesmerized by this visual phenomenon and would guess my silence started to scare Jerry. "Are you on some drug Bobby?" he asked. I motioned as best I could to the affirmative which understandably pissed him off. I couldn't blame him, because the whole damn thing was pretty weird and I was in his house.

He finally got that I was in deep shit and called UCLA Medical Center in Westwood. He was able to get a psychologist on the phone and described to the guy what seemed to be happening to me. The doctor asked if I could talk and Jerry handed me the phone.

I managed to mumble something incoherent into it when a voice came out of the ear piece asking, "Are you hallucinating now Mr. Jameson?" As the sound of this guy's voice echoed in my ear the telephone began to melt in my hand, and I remember distinctly thinking that the guy on the other end of the line was in no way any more equipped to deal with the situation than I was.

I sank into a deep sense of loss while the disintegration of my mind continued. I recall vividly just plain giving into the madness. At that moment I was sure I would never come back from where I was. What happened to me in fact, took 20 years to get over and to reach a point where I felt I'd gotten beyond it.

I am again telling you something that is intricately involved in the changes that occurred in me during the 60's. I feel obligated to report specific moments in time that I know were turning points for me, and because this trip was so powerful and frightening, I increased, once again, my dependency on other drugs.

My ever increasing intake of more powerful drugs and sedatives was the eventual downfall of the person Bobby Jameson, although much that was negative arose out of other actions I took as well. I have written about them here on this blog and will continue to write about them. I will add, that in the long run some good was gained.
Posted by Bobby Jameson at 4:25 PM