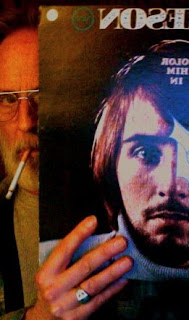 I guess I could write something else. Something pleasant and uplifting about my wonderful life in the music business, and how I made a host of life long friends, and am happily married and have two children, a boy and a girl, who's names are Mo and Jo and we all go to church together.

I could write that, but it would be a lie, so I write my own story. My story isn't a "happy" story but it is a true story. If you think I get a kick out of telling you about "The Christ Complex," or about a bad acid trip that changed my life, or posting a list of all the records I made and wasn't paid for, you'd be wrong.

When I complain in written words about lack of airplay in L.A. this isn't a 40 year old sour grapes issue, it's a fact that I had to contend with at the time. What do you think it felt like to make record after record, good or bad, that never got played on L.A. radio from 1964 until now?

Either the records I made were so Goddamn piss poor that they didn't deserve to be played, or I was getting screwed around. Something you don't know is that I was not really known for being a recording artist in L.A. as much as I was for being the guy in the street during riots with the police over curfew laws imposed to impede anti-war demonstrations.

How could I be known for music when nobody in L.A. ever heard it? I was considered a joke by the music industry back then and I still am today. Do you think everybody who knew me then is glad to see me back? They're not. I think about a half a dozen or so people who knew me have contacted me on myspace and said hello. Mostly I am ignored by those who knew me.

Do you think anybody has offered to help me get this mess straightened out so I can get back my life after my long absence? Not one thing has changed in my life or the music business other than 2 United Kingdom record labels have illegally released two of my old albums on cd.

One of them gave me nothing (REV-OLA UK) and the other one (Fallout Records UK) gave me $1000 and 50 cd's of my own work. That's the big change since the 60's. $1127 and 50 cd's. I guess I should be grateful. All I am accomplishing, by doing this, is to once again put myself in a position to have people pass judgement on me. I made the choice to do that.

Sometimes it feels like the facts are getting in the way of the story. I sense that the more I tell you what happened the less pleasing it is to those who read what I write. I am afraid that many of you ought to abandon reading this all together, because the story isn't going to get better it's going to get worse, a lot worse.

The reason for that are the facts. This story isn't going to have a happy ending where all my cares from the past are going to be magically transformed by a miracle of God and I live happily ever after. I am going to get the literal crap kicked out of me over and over until I finally just gave the fuck up and tried to kill myself numerous times.

If you want to know when I am going to get to the good part, forget it there isn't any. Some would say, "But you got sober and you're alive and that is a miracle." On that we can agree. But the circumstances by which I exist are demoralizing in the extreme.

As I continue to write I have to struggle with the facts of my life. I thought, and still have hope, that by writing this God awful story something will change in my life. I hope that someday I can walk away from my past and actually have a life worth living in, but so far that is something I have no experience with... Being Bobby Jameson sucks!
Posted by Bobby Jameson at 4:44 PM