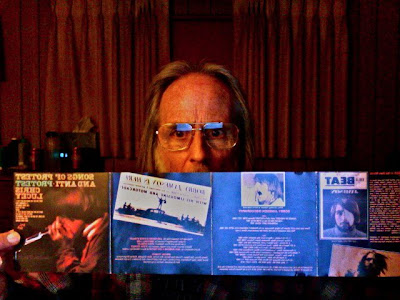 The issues discussed in the piece below pertaining to Steve Stanley have been resolved in a positive and constructive manner since the posting of this part.

The entire deal, between these entities, is legally questionable, but what is significant here, and downright pathetic, is Rev-Ola's use of the Linkletter suicide, and my connection to Diane's untimely death in 1969.

I will quote verbatim what is printed here, and what I became aware of in my first reading of this text, when I was sent a single used copy of the cd by Steve Stanley in 2003.

"Art Linkletter had a television program entitled "Kids Do The Damndest Things" and he couldn't have been more right about that on the night of October 5th 1969. On this date, his own daughter, Diane Linkletter (originally turned on to LSD by none other than Bobby Jameson) apparently took her own drug-induced leap into infinity.

Diane jumped out of the sixth floor kitchen window of her Shoreham Drive apartment in West Hollywood. This event occurred around the same time that Bobby made his own infamous leap off the Continental Hyatt House.

Interestingly, an autopsy report later revealed no traces of LSD in her system. It's likely that Linkletter was experiencing a flashback as she was famously known as the "mother of all acid trips."

Minutes before her leap, she complained to her brother, Robert, that her "brain was being destroyed" and she "had to kill herself."

What is exasperating about this, is even within the lines of what is written here, it states that an autopsy report showed no signs of LSD in Diane's body, yet the freewheeling use of my name, and the assertion that Bobby Jameson had provided the drug to a dead girl, was printed here anyway.

This was done purely for effect, by those responsible for making this publicly available at my expense, as well as Diane Linkletter.

The business decision, by certain individuals, that juicy tidbits make fore good publicity, whether true or not, and help sales, will forever be on the backs of Joe Foster, Rev-Ola Records, Steve Stanley, Cherry Red Records, and ACE Records UK, who claim to own outright the rights to my work, and have benefitted financially as a result of the reissue, along with the rest I have named here.

Oh by the way, the one person who did not benefit from the release of the Chris Lucey cd was Chris Lucey himself, otherwise known as Bobby Jameson.

The information written into Rev-Ola's reissue package, was attributed to Kim Fowley, the source, according to Steve Stanley, when I asked him where this crap came from. Kim Fowley is the last person that should be asked about the facts of this incident.

Some of you wonder why I bring this up, so I will tell you: Rev-Ola Records used the linkletter suicide to help promote their product and increase sales of the Chris Lucey cd. I am at the point in my own story, where the Linkletter suicide is currently being written about by me, from the period of 1969 in my life. Because of that, the use of her death by Rev-Ola, is relevant to my telling of my own story on this blog.

I did not make the decision to use Diane Linkletter's suicide as a promotional gimmick to sell records. Rev-Ola Uk, and everyone connected to Rev-Ola's reissue of my work made that particular choice.

I am sure that friends of Joe Foster, Steve Stanley, Kim Fowley, and others, will all be up in arms at what I am writing here, and will scold me for talking about how what they did effects my life. It is clear to me, that my welfare is completely unimportant to these people, as it was in the past. Their feelings, and their good names, will possibly be tarnished by my words, but in fact mine have been tarnished as well.

This post was left in tact to preserve the original narrative of the overall blog. See Steve Stanley's posted email in (part 93), and my response in (part 94) of this blog.
Posted by Bobby Jameson at 9:36 PM