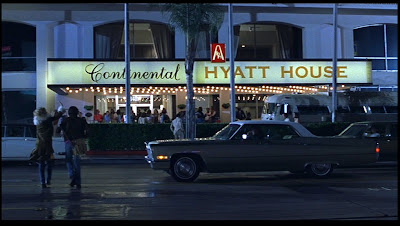 The sheriff's department was concerned because I was now highly agitated. They decided they had to do something before I jumped, or fell by accident, because I was moving around so much on the ledge.

One officer was talking to me from behind the retaining wall at my back, assuring me they had taken care of the asshole in the window, with the camera, who'd gotten me so fired up.

I was trying to answer him, and look over my left shoulder at his face, which I saw was filled with fear and concern. He kept trying to get me to give up and reconsider my options.

I told him there were none. "That's why I'm out here," I said. He asked me, "Why, exactly are you out there?" I told him, "I been ripped off too many times by the record business. I've had enough of lying assholes."

He said, "There's gotta be a better way of dealing with the problem than the one you've chosen here." I said, "I chose this way as a last resort after 7 years of getting fucked over. I don't want to keep getting ripped off, so I made up my mind to kill myself."

He asked, "Don't you have friends who will help you?" "I don't have any friends," I said, "I don't know if I ever had a real friend in my whole life." The back and forth conversation continued between the officer and me.

Two other officers had made their way up to the retaining wall behind me, but stayed out of sight on the other side, where the officer talking to me was. I didn't see these two officers. They crawled up to the wall on their stomachs.

As I continued focusing my attention on the first officer, the other two popped up in back of me, and reached out over the wall and grabbed hold of me in a split second. They were not going to let go, and I felt myself being drug up over the wall to the concrete landing where they all were.

It happened so fast that there was no way for me to escape from their grip. I never knew, and still don't, if I would have jumped in the end, because the intervention was completed before that final choice was made.

I can't remember a lot after that, except I ended up in a psychiatric ward at a place called Edgemont Hospital, way out on the eastern end of Hollywood Blvd., out toward Glendale, where I'd once gone to high school in 1962 and 63.

I spent nearly 3 hours on the ledge of the Continental Hyatt House, and still remember to this day what it looked like and felt like. I wonder at times, like now, as I write this, if I would have ended it all?
Posted by Bobby Jameson at 5:34 PM