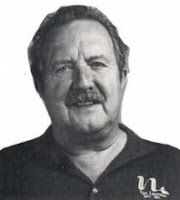 "The Rockets" aka "Crazy Horse"

I ended up in the locked ward of Edgemont Hospital, on suicide watch, after my Continental Hotel experience. Edgemont Hospital was located right around Vermont Ave. and Hollywood Blvd., in the east end of Hollywood.

I stayed in the locked ward long enough for the staff to decide I was no longer a threat to myself. In time I was moved to the west wing, and allowed the freedom of the hospital hallways and outdoor patio, where I could get some fresh air and sunshine.

I was on medication to help keep me calm, but in my way of thinking the crisis was over for the time being. It was the combination of booze and cocaine that had gotten me so crazy, but after a week or so I'd cleared my head and body of those effects.

While I was in Edgemont "drying out" as they say, three members of "The Rockets," Danny Whitten, Ralph Molina, and Billy Talbot came to see me. By that time "The Rockets" had morphed into "Crazy Horse." Somehow they had been able to convince the staff to let me out of the hospital on a three or four hour day pass.

They took me to a recording studio where they announced, "We're going to make a record!" They'd all decided that this would be the best therapy possible for me at that time, and I was ecstatic at the prospect of cutting a record with my old friends.

Armed with a fifth of J and B scotch, purchased at a liquor store on the way, we headed for the recording studio, which I can't remember the name of. When we got there Danny pointed to Red Rhodes who was there to play steel guitar, something I'd used once before while doing the album Working in 1968. I met Gib Guilbeau, who played bluegrass fiddle on the session, a first for me.

The songs we cut were Big Spoke Wheel and My Body Doesn't Care. Big Spoke Wheel was written by me on a rooftop in West Hollywood, in 1969, during an eclipse of the sun. I have no memory of how they even knew about the song, or who was gonna pay for the session. Possibly Gavin Murrel produced it, and I don't know who engineered it.

It was a remarkable gift they gave to me that day, and what came out of it is captured for all time in the finished recordings. Both Danny Whitten and Red Rhodes are gone now, but they will live forever in my memory and through their music. I was lucky enough to have been a small part of it. These recordings are more important for their sakes than mine.

It is another part of the historical record of music from that time, created by chance and circumstance, and the friendship of those who lived and died playing the music they created and loved. To me, "Big Spoke Wheel" and "My Body Doesn't Care" are recordings created out of love and respect by those who participated in the making of it.