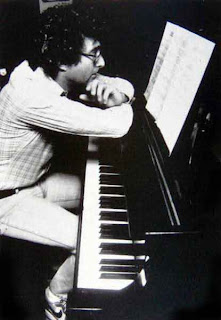 The fact that Jesse Ed Davis was an American Indian (Kiowa) was a big deal to me, because I'd grown up, in part, in Arizona, and was forced to work for my Mormon step father on the San Carlos Indian Reservation, north of Phoenix, when I was 15 years old.

I never forgot the absolute disgust I had for my step father and his associates, and the way they treated the Apache, Navajo, Zuni, and Hopi Indians. I worked in the alfalfa fields around Phoenix in 1960 for him loading hay trucks with Apache, Mexican, and poor white laborers.

I did this work under the threat of being made a ward of the court of the State of Arizona by Francis Farr; he was my mother's third husband. I remember telling Jesse that I believed the United States had committed serious crimes against American Indians, and that I was ashamed at having been forced to work for people who may have helped do that.

Similarly, Jesse's disgust with the white man's religion, Chistianity, and the way it was used to systematically destroy American Indian lives, culture, and language throughout American History, was the connection we shared in common while recording "Jesus Was An Outlaw Too" and "Junkie Jesus."

The fact that I'd taken the sanctity of this subject, and turned it inside out, and made it into music and lyrics was a serious and important concept for both of us while constructing the recordings. It was more than just making a record. It was a statement of deep and righteous anger and sentiment, directed at the untouchable subject and the subject's benefactors at large.

He, as well as I, took pride in the creation of what some deem a sacrilege, but in our way of thinking was a contrary statement of strength aimed at hypocrisy, bigotry, and genocide by the status quo over a couple of hundred years. It was also a continuation of my use of opposites within a single context, as I had tried to do In the second Verve album.

In the original session there were three songs recorded. The third song, which I have a partially completed version of, "Mary Please Forgive Me," was in the same vein as the other two songs, but not nearly as well constructed. Hopefully in time I will make this version available along side the other two. I have already posted the original version, which was written and recorded in Ohio a few posts earlier. (part 100)

What I have written here is my version of what transpired in 1970-71 between Jesse Ed Davis and myself. I am not seeking agreement or approval from anyone regarding my own experience here, or my recollection of it some 38 years later.

When Randy Newman came in to do the piano overdub on "Jesus Was An Outlaw Too" he started laughing when he heard my vocal track and the lyrics. He was sitting at the piano with ear phones on, and looked up at me as I approached him asking, "Did you write this?" "Yeah." I said, not knowing whether he approved or disapproved.

"This is great," he said, "Great stuff." I was relieved and gratified, because Newman was a hell of a writer and his approval meant a lot to me at the time and still does. You don't have to agree with what I wrote to be able to acknowledge that it was well written and original, so I never knew one way or the other whether Randy approved or not of the subject matter, but he did acknowledge his approval of my work in general. On his way out Newman said, "If you got anymore stuff like that you want me to play on. let me know, that was fun."

When I first heard about Jesse, I was told his name was Jesse Edwin Davis, so that's how I greeted him, which he immediately corrected. "Ed," he said, "Ed Davis." I got that this was important to him right off, so it became a running gag that afternoon in the studio to occasionally refer to him as "Edwin," which he hated but tolerated from me those short few hours in 1970-71.

The guitar overdubs, and guitar work in general by Ed Davis on these recordings is, in my opinion, some of his finest work. Until I popped up with them after 35 years or so, only a hand full of people ever knew about these songs, or that Jesse had worked on them with me.

The songs can be vaguely heard in the movie "Clay Pigeon" MGM (1971) as background music in a couple of dance scenes, but otherwise went completely unnoticed for 35 years until I put them up on my myspace site.
Posted by Bobby Jameson at 11:04 PM