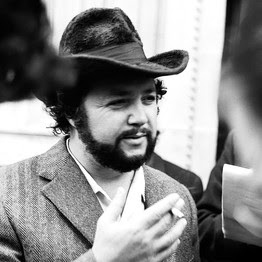 The Troubadour was never the same for me after that night with Danny. Every time I went in there, I remembered vividly the look on his face as he quietly walked by me and out of my life. I still went there, because it was close enough to walk to, but I never felt comfortable again.

One night I ran into Herbie Cohen there, and went over to say hello to him. I'd never gone anywhere socially with Herb, except when I met him years earlier at his house with Zappa, so it was kind of unusual to encounter him in that setting.

We stood in a corner of the bar, and talked a little about music and the business. I asked him if anything was going on as far as my stuff was concerned and he said, "No."

I'd been writing songs for Arizona Music, which he and his brother were running, for about five months, and couldn't really understand why nothing had been accomplished, other than me putting a lot of finished music into it which I asked him about.

He seemed irritated by my question, and told me to back off a little. He acted like I was his office boy, and I wasn't willing to accept the way he was treating me, so I told him so.

He acted as if I were a Hollywood pussie who couldn't fight, and that's how he treated me. This of course played directly into my constant problems with various record business executives and producers throughout the past. It had become a major sticking point in my personality, and I was not willing to take any shit from the likes of Herbie Cohen.

It didn't occur to me at that moment that Herbie and his brother were the ones paying me each week, so I said something to him that really pissed him off. It was nothing overt like, "Fuck off" or "Fuck you," just something that for whatever reason pissed him off.

Out of nowhere, Herbie turned on me. He tried to kick me in the balls while I stood in front of him. I was surprised by this, and knew instinctively that he'd attempted, but failed, to do some real damage to me.

I turned my body sideways, and grabbed my beer bottle off the bar by the neck. I held it up at shoulder level hissing, "What the fuck are you doin' Herbie? Why'd you try to kick me in the balls?"

Knowing he had blown his surprise attack, Cohen looked at me with that "let's get it on" look that I'd seen plenty of times before. "Come on Herbie," I said, "You wanna fuck with me?" I waved the beer bottle in his face, and watched his eyes follow it in my hand.

By this time Herbie's original opinion of me had shifted, and it was obvious by the concerned look on his face. That old "crazy fuckin Jameson" shit came over me, and I was ready to go to war. "Come on Cohen, you fuckin' punk ass mother fucker. I'll kill ya you son of a bitch."

Herbie glared at me in anger and I glared back. We stood there a moment, and then he just turned away and walked out the door. I don't remember what I did, probably stayed there and got drunk.

Whatever happened that night had far reaching consequences in my life. The end result was that the Cohen Brothers quit paying me my weekly salary and I began to panic.

I went to their office in Hollywood, but Herbie wouldn't talk to me. Martin said there was nothing he could do, because Herbie told him not to pay me. I left, feeling like my world was again crumbling, and that old feeling of "now what do I do" swept over me like a tidal wave.

One day everything was fine, and a day later everything was fucked up. I hadn't started the fight with Herbie, but I must have gotten to him in a way that he was unwilling to excuse or forget, because his form of revenge was swift and deadly in my world.

As usual, I had no money saved, and nothing else going on. I retreated to Gavin's house, or some other place, and got loaded. I always got loaded when I didn't know what to do.

The weeks went by, and I sank deeper and deeper into an abyss of fear and depression. I couldn't pay my rent and even though Gavin and Ron didn't pressure me, I felt bad that I couldn't cover my own end.

I'd sit at the piano and play songs, and write new ones, but no matter how hard I tried, I felt like life, my life, was not worth continuing. I was dog tired of the endless problems and always being broke. I was tired of always being in the position to have to kiss someone's ass or watch my world collapse.

It was 1972, and I had been doing this kind of bullshit since 1964, and nothing ever seemed to change. I'd get up for a while, and then go straight to the bottom again, as if that were my natural place to reside. At the bottom. "Maybe it was," I thought, "Maybe I just needed to accept it. Accept that the bottom was where I belonged."
Posted by Bobby Jameson at 9:57 PM