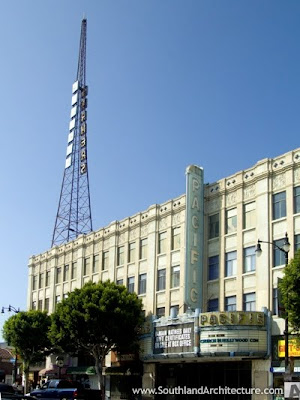 I was completely exhausted. My tired eyes searched the terrain for a starting point down, as I struggled to readjust my thinking to fit the task before me. It wasn't that climbing down presented impossible problems; it was a crisis, I suppose, because of the condition of my body, mind, and the wind.

I'd expended a lot of energy getting up there and performing for the crowd, so the lack of sleep and being loaded presented me with new and challenging parts of the puzzle left to solve.

Above, multiple helicopters continued their endless circles, and the crowds had swollen to enormous sizes on three different sides of the Pacific Theater. I could see faces peering out of windows in adjacent buildings, and from decks of houses scattered throughout the hills behind me.

It had become a full fledged event, I thought, as I stood there scanning the surrounding area. Because of the shape of the steel beams that made up the tower's construction, there had not been any place to sit down really. The best I'd been able to do was to lean against anything vertical while standing on anything horizontal.

To make matters worse, I was now paying strict attention to electrical lines that ran from top to bottom on the tower. Far more visible than I'd noticed coming up, they were quite pronounced while continually looking down. They loomed before me as a main consideration for my journey downward.

I popped another chloral hydrate and took another drink in anticipation of the dizzying trip down through the non-stop wind. I surmised that the lower I went on the tower, the less trouble I'd have fighting it. This in itself gave rise to the thought of "let's get going."

Moving downward and sideways, I began getting used to the different foot and hand angles as I crisscrossed the face of the tower. My mind was adjusting to the different pattern of beams I encountered, and a new system of how to approach these patterns quickly developed.

The acute angles, which are angles somewhere between vertical and horizontal, presented the greatest problem. On the way up, these angles were points of leverage; on the way down they were more like slides.

Climbing up on them, I had to pull my weight; going down on them, I found myself fighting to hold my weight back. Not so much at the smaller top of the tower, but becoming more and more so as the tower widened at lower levels. I was getting the hang of it though, but it still proved to be tough going.

As mentioned, the electrical lines were more of an issue now than they had been before. I was continually having to maneuver my way around them, being careful of where I put my hands and feet, which only added to my growing list of difficulties.

Looking back now, it is somewhat amazing to me how careful I was climbing down, and how completely reckless I was going up. The fact that the lines were far more visible looking down on them, coupled with the level of my exhaustion, would explain this to some extent.

Below me on the roof was an ever growing crowd of officials, firemen and police preparing for my anticipated arrival. Staring down at them, it occurred to me that they would probably arrest me, if in fact, I safely reached their location.

I continued dwelling on this thought, and decided it was not an acceptable outcome, after enduring over three hours on the tower. Because of what I'd gone through, and the condition I was in, I didn't want it to end like that. I slowed my descent to give due consideration to this unwelcome concern.

As I thought about this very possible outcome, a rush of anger and adrenaline surged through me, instantly clearing my mind and energizing my body. I began bouncing around again on the tower as my weariness all but vanished. By switching the psychology of my thinking, I now felt in control again, having made the decision to refuse being arrested as the final outcome.

Now I was alert, and my tired limbs were once again my trusted friends. Gone was the fear and trepidation which had perviously engulfed me.

I'd been in jail too many times to accept without a fight going there now, as the final outcome of my struggle to be heard. My decision was made. I would refuse to come down merely to face that form of final humiliation.

My anger, rising out of my fear of getting arrested, was like speed, and had the magical power to heal me in times of crisis such as this. On that particular day on the tower, it brought welcome relief in the form of new-found strength to my deteriorated condition.

I continued my way down, but in a much less deliberate fashion. Somewhere around 60 feet or so above the rooftop, I peered down into the pool of gawking faces looking up at me. I yelled down at them, but between the continuing drone of the helicopters, the wind, and the distance, it was impossible to hear.

I moved even closer to them, having decided I wanted to pow wow with the authorities. Stopping my descent at around 40 feet, or four stories above the roof, I made the critical error of believing I was closer to them than I actually was.

I'd been up very high for a longtime, so it was easy to misjudge the distance to the roof at this point. Simply stated, it looked a lot closer than it was. This critical mistake in judgement would prove to be my undoing.
Posted by Bobby Jameson at 10:25 PM