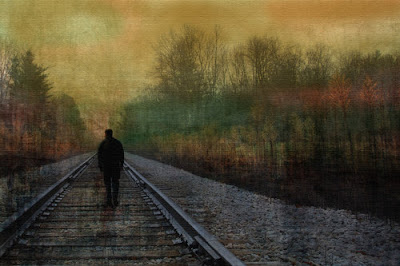 I sat alone in the car looking at the empty parking lot at Mayfair market. The early morning gray and a sunless sky added to my sense of feeling lost.

I took another drink of scotch and stared at the bottle in my hand. I didn't know where to go or what I was going to do, so I just sat there for a long time and drank.

After burglarizing a number of hotels in the past few months, I felt like a real sleazebag. The outlook for me on this day was pretty grim.

I longed for the good old days when my future looked bright, and none of what I knew now bothered me. I remembered all the places I'd been, things I'd done, and people I'd met before today.

April Fool's Day, and the joke was on me, except it was no joke. This was as real as it got. This is where I'd gotten after 31 years of life. Drinking alone in a car, at six in the morning, feeling like shit for stealing someone's luggage out of their hotel room.

After some time, I started the car and drove out on the street. I told myself to be cool so I wouldn't get busted for drunk driving on top of everything else that was going on.

Twenty minutes later, I pulled up to the curb in front of my old AA sponsor's house and sat there staring at it. It was still early so I was pretty sure no one was up.

I tried to drive away a couple of times, but didn't. Finally I got out of the car and walked up the driveway to the back of the house. I didn't want to wake anyone, so I didn't knock on the door; I just needed a place to think.

Bottle in hand, I checked the back door and found it open. With a sigh of relief I let myself in and headed for the family room and a large soft chair. I'd been in the house many times, so it wasn't a problem maneuvering my way around.

I don't know why I'd decided to come here because in my mind I had no plans to stop drinking. If anything, I wanted to drink myself into total oblivion and even death, but found that accomplishing that was extremely difficult to do.

I settled back in the big chair with a sense of relief and stared off into space. I looked at my life and asked myself what I really thought. What did I think? Where did I stand? My answer was this. I stood in the middle of nowhere.

At that moment, I didn't believe in anything, including myself. I was a disaster in every way in my mind. I thought specifically, and I do mean specifically, "Fuck me, fuck you, fuck life, fuck the planet earth, and fuck God." That was my exact position. I asked myself if I would ever stop getting loaded? "Fuck no," I thought, and tried to take another drink.

I lifted the bottle, but couldn't make my arm put it to my lips. I tried repeatedly, but couldn't do it. It was as if someone had a hold of my arm and wouldn't let me put the bottle in my mouth.

I just couldn't do it, and believe me I tried over and over again. This is the last thing I remember until later that morning, when I came to, and the whole family was staring at me saying something like, "Hey, he's waking up. Bobby's waking up."

My old sponsor's son had gotten up and gone to the bathroom and found me on the floor. He'd thought I was dead and woke up his parents. Together they had picked me up and carried me to another room and put me on a couch or bed, I don't remember.

Now they were all staring at me as I came to, and looking both concerned and relieved at the same time. I began apologizing to them for coming in and being drunk and uninvited, but they said it was OK, and they were just glad I wasn't dead.

I told them how I tried to take a drink and couldn't, but it just came out like blither. My head was turning and I felt like death warmed over. My sense of remorse was overwhelming, and I was ashamed of coming into their house like this.

I'd scared the crap out of them and realized that all I'd been thinking of was myself. That was it. All I ever did was think about myself, that was exactly the problem. Never them, always me. Never her or him, but me, me, me. My feelings, my life, my this, my that. I was tired of the bullshit of being me.

I needed a drink, but didn't want one. I needed to get up and leave, but stayed. I wanted to blame someone, but couldn't. I'd run the gamut. I'd burned down every bridge, used up every favor, and was finally staring in the face of my problem, me.

I couldn't lie to myself any more. I couldn't blame anyone else any more. It was me drinking and using. It was exactly that and nothing more.