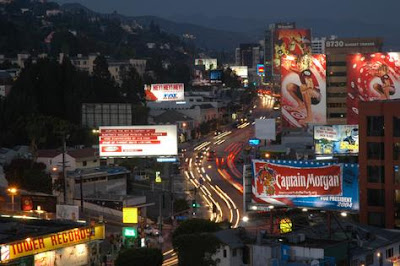 West Hollywood and the Sunset Strip

It might appear to some who have read what I have been writing here that I have a problem with AA, which I do not. The program of Alcoholics Anonymous, as laid out in the simple text of its book, is straight ahead, and works.

My problems were with me, and various members of the program who attempted to shove their version of AA down my throat, and then say they were only trying to help.

If you've read my story, you are aware that I probably came to the program a total and complete mess. Possibly more of a mess than some others.

As I began my life in AA, I'd found different books about spirituality that I used to deal with my life and it's numerous problems.

But rather than dealing with many of my own character defects and flaws at a rock bottom level, I covered many of them over with techniques I found in some of these books.

Science Of Mind gave me a way to focus my attention, and worked in the sense that I, either by coincidence or design, was able to appear to have something tangible occur in the way of results. But when the house of cards I built collapsed, I was again faced with the bulk of the problems I came to the program with.

In the early days of my sobriety I lived in West Hollywood and the surrounding area, which was full of well off, sometimes quite successful, people. A lot of show business people, doctors, lawyers, etc.

I had fallen into the trap of equating success in sobriety with success with money, property, and prestige. Back then I didn't know any better, and it just seemed to be the way it was.

Because of my initial financial success in the program, I knew about both sides of the proverbial coin so to speak. I had played the role of the successful person for awhile, and then the role of the loser. This is not an overstatement. It was literally that stark.

The west side of L.A. is either hot or cold, like it or not. The competitive reality exists there, and you either get it or you don't. I'd never gotten it from the standpoint of being an ongoing success, but I knew the area like a coyote knows his hunting ground. I'd spent too much time there not to know how it worked.

One of the strangest things about 12 step programs, particularly in places like West L.A., is that people come to them because they have problems beyond just drugs and alcohol.

After they've been clean and sober for awhile, they start acting like they don't have those problems anymore, or that they've fixed them all.

This was and is a dangerous mindset, and in my world, an absolute nonstarter. If nothing else, I knew I was screwed up, an opinion shared by most who knew me. I guess it is always easier to focus on someone like me than to have to look at oneself.

I was never quiet about my problems. I just couldn't hide them. I tried, but never had success in sustaining the persona of "every thing's fine." My resentment toward living sober like I'd lived when I was loaded, bothered me to no end and I said so.

I would appear at times not to be sober at all, because I was so vocal about these debilitating conditions. But beneath that outward appearance, I was on a 24-hour a day search for real answers to my problems, and for peace, although nobody much thought so then, or thinks so now.

Difficulties again rose along the way when I got involved in a second relationship with a well known actress on the program. This ended after we had a fight over me collecting junk stereo equipment to sell.

I had piled this stuff around her apartment, where I was living, and she had finally gotten tired of it and said something harsh to me about it.

My reaction to her scolding me led to the fight, and I raised my fist as if I were going to hit her. I didn't, but knew I had come too close to the real thing. I decided it was unacceptable on my part, and my punishment for this act was to remove myself from her home immediately.

A few weeks later, I was in an AA meeting in the area, and she and her new boyfriend walked in together. When I saw them I felt like a trapped rat. I would have left, but I was leading the meeting, so I stayed.

In somewhat of a panic, I searched my mind for a way out of the situation. Coming up empty I simply walked toward them and watched their eyes as they saw me approaching.

When I reached them I smiled and stuck out my hand saying, "I'm glad to see you both here, thanks for coming." I'm sure they were as surprised as I was to hear those words come out of my mouth.

After that incident, I could not shake the fact that that simple gesture had calmed the waters and eased the tension of the moment. I studied the phenomenon over and over, and began thinking of how it could be used in my life overall.

I got out my Science Of Mind book, after a long absence, and recall reading this sentence by Ernest Holmes. "If you're not loving everybody unconditionally, start now."

Hell I knew I wasn't loving everybody, so I just started trying to at least find something good in those whom I'd had trouble with, which was almost everybody.

In 1979 I was painting the interior of some guy's house, and had about three and a half years of sobriety. As I worked I wondered if I was ever going to get out of the seeming rut I was in.

Carol Paulus, whom I still knew, and talked with periodically, told me about a lawyer she met who was interested in getting involved in the music business.

She said she'd told him about me, and said he wanted to meet me. At first I brushed it off, but it kept coming back up in conversations over time.

Finally after realizing she wasn't going to give up, I agreed to meet with him at Carol's apartment, and play him some new and unpublished songs I'd been writing. If nothing else, I always had songs. Lots and lots of songs.
Posted by Bobby Jameson at 8:51 PM