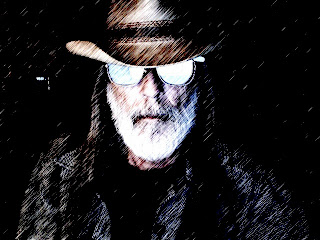 I was living at Carol's for one reason: I could work there, even with the drawbacks, better than any place else I could find.

The tape deck and amplifier I was using were hers, so because of that, working there made sense.

The electric guitar I played was borrowed, as was the Rockman Effects box. I owned the small Yamaha keyboard I used for the drums, bass, and organ, and the acoustic guitar and speakers were mine.

I scammed a $75 equalizer and a $14.95 Shure microphone as a gift from a lady named Lee, and the cassette deck was again Carol's, I believe.

Working on these songs, in 1985, kept me busy as well as crazy. I wouldn't eat enough, sleep enough, or treat myself like a human being, because being human was the last thing I felt like.

I resembled a machine more than a person. A machine dedicated to my precise programmed assignment, which was to write and record these songs.

Somewhere in my tortured psyche there was still the hope that, once accomplished, someone would say, "Hey these are really good."

I would lie to myself about this, saying, "I don't care," but in all honesty, that old need was still churning way down deep inside me, but enough of the "I don't give a fuck who likes these" was there to allow me to write and record what I wanted.

Once again, I penned a blues song that was descriptive of how I was at the time. It involved very real pieces of my failing life experience and the emotional turmoil I was in.

The two failed relationships, sober, that ended dismally, and two business arrangements, sober, that had also failed in the long run to change my life into something more reliable and predictable.

The anger, defeat, abandonment, and sheer lack of hope, became lyrically, the bedrock of the song "Movin To Hell." It was, and is, a dark, yet concrete, evaluation of my life then as well as now.

The blues for me was a workshop of the heart and soul. A single place where the bleak realities of struggle and defeat could be set to music and tempo, and allowed to fill the air with a message and plea for something better, a society, claimed out of love by many, but only truly understood by one's own walk through the fire.

There are 2 versions of Movin To Hell. The first is an acoustic version. The second is an electric version which was cut at the same time in 1985. The edition of the distorted electric guitars adds to the force of the message of the lyrics for some, and will be a distraction for others. I like them both, and recorded them both for my own reasons.

Posted by Bobby Jameson at 4:32 PM