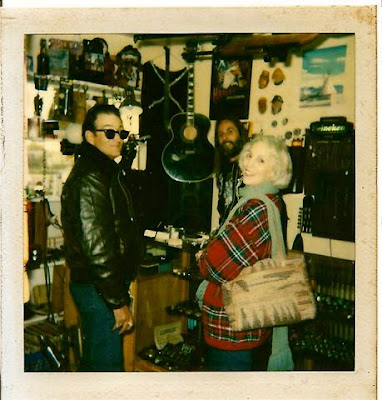 People piss on you and argue a point, which is in their best interest only, then decide that you have no reason to quit speaking to them when you finally get fed up. Friendship to them is being able to say, and do, whatever they want and demand you accept it. I find this to be the height of arrogance and a damn good reason to cut the ties, whatever they were. In 1985 I did this with and entire city, Los Angeles, because I could not come up with one good reason to stay, but a lot of reasons to leave. There wasn't one person in that whole town that I told where I was going before I left, not one person I valued enough to say goodbye to. I had had a belly full of friendships that meant little or nothing when the shit came down, and in my life the shit always came down. I was honest about being endless trouble. Honest about conveying the reality to those I knew and/or those who I met along the way about myself. My take on being me is that everybody gets tired of a person who is always going through hard times, and I had been going through hard times since I began to crawl, to use and old Albert King line. The blues, and the kind of living that gave rise to them, was a lot of what I'd experienced from an early age. Like working in Arizona in the alfalfa fields around Phoenix at the age of fifteen, or unloading boxcars for two bucks at night, because it was too hot in the daytime. In 1956 and 57, in Tucson, AZ., I was put into a juvenile detention center called, Mother Higgins, a despicable place, located at the edge of downtown Tucson. I still can't remember why I was in there, multiple times, other than the word incorrigible is firmly stuck in my mind. That pretty much means I questioned some authority, and according to the dictionary, could not be corrected. So, as you can see, I have had this problem for a very long time, being hard to correct. Many of the people who I once knew, in person, have attempted to correct me with no success. In fact all they managed to do was piss me off and cause me to further separate myself from them. At this point I am pretty well separated from just about everybody. But that is not new. That is exactly the way it was back in 1985 when I just up and left L.A. It took a lot of years to connect with my brother and mother, once I got here to San Luis Obispo, Ca. A lot of work, on all our parts, to become friends and learn to trust each other, and depend upon each other. I had to overcome decades of old ideas, and hurts, before I could open up to them, and they as well, had the same job dealing with me. Friendship is about trust, about acceptance, and about love. It is about reliability and making your word mean something other than just the words being uttered for convenience. This is something my mother, brother, and I, learned to do with each other. We learned we could count on each other no matter what. I attempted this with others, but found it impossible to accomplish. It seems there needs to be something deeper than the average connection with people. There needs to be a deeper yearning to connect in a way that is less prevalent amongst most. There were times, many, that I wanted to pick up and leave here as well, but opted to stay and work through every goddamn difficulty that arose. It was the first time in my life I chose that road and it was a hard way to go, but the most rewarding and valuable in the end. It was like a marriage in many ways, through good and through bad. It was a commitment to someone else instead of just to myself. It made me a better person and it taught me to understand the needs of others rather than demand that they understand my needs. To put back together a broken family, and it's members, is, and was, a daunting task. It takes everything you have to make it work, never stops to ask you if it's convenient, or fun. It is an affair of the heart and mind, and stretches you out like a rope tightened to it's breaking point. But if you persist, and I did, it will reward you in ways you cannot know other than by the doing of it. I am still incorrigible, still pissing people off, and most of all still willing to give it all I got. My mother and brother did not fix me, nor I them. What we learned was to accept each other the way we were, instead of expecting each other to be the way we wanted.
Posted by Bobby Jameson at 11:14 PM